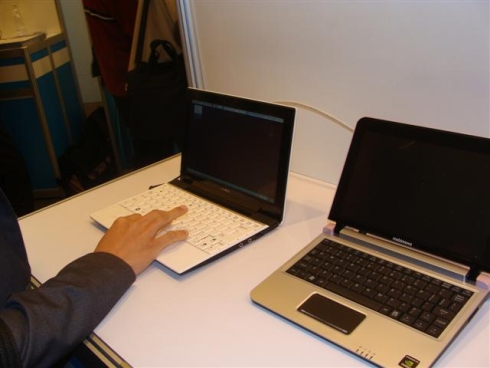 There’s been a lot of talk about so-called smartbooks in 2009. These netbook-like mini-laptops have low power ARM-based processors and are designed to get excellent battery life while maintaining a constant connection to the internet via WiFi or a 3G cellular connection. In other words, they’re a cross between a netbook and a smartphone, thus “smartbook.”

Chip-maker Qualcomm recently announced that Lenovo would be making one of the first smartbooks to hit the market, and it will be available in the US through wireless carrier AT&T. But despite the fact that Qualcomm and other chip and PC makers have been showing off demos for the last year, not a single ARM-based smartbook has hit the market yet.

But now Taiwan’s Pegatron Technology says it’s received a large number of orders for smartbooks that will launch in early 2010. Pegatron makes devices that tend to get rebranded and resold in the US and other western markets by big name PC vendors. So it’s likely that we can expect to see a small flood of announcements during the first quarter of 2010, perhaps with some coming as early as the CES show in January.

Pegatron says the ARM-based smartbooks could sell for around $200, although that’s probably the subsidized price that you’ll get only when you sign up for a long term wireless service contract. Pegatron’s smartbooks are expected to run Linux-based operating systems rather than Google Android or Windows CE. Google Chrome OS-based devices could hit the market later in 2010.

Meanwhile, the folks at Shanzai got to spend some hands-on time with a 10 inch Pegraton smartbook prototype with an ARM processor. The laptop was running Ubuntu Linux and had a fairly large keyboard and touchpad.