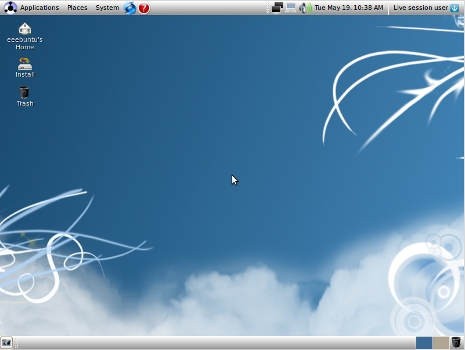 Over the past few years a number of custom Linux distributions for netbooks have popped up. And while some were designed from the ground up by large teams of developers with corporate backing, like Moblin Linux, Fedora Mini, or Linpus Linux Lite, others are maintained by just a handful of independent developers with a passion for Linux and netbooks.

One of the most popular distributions is Eeebuntu, which is actually a customized version of Ubuntu Linux that’s designed with a number of optimizations for Asus Eee PC and other Intel Atom powered netbooks. There are a number of other netbook operating systems based on existing distros, such as Easy Peasy (also based on Ubuntu), PupEee (based on Puppy Linux), and FluxFlux-SE (based on PCLinuxOS).

The advantage of hitching your project to a larger Linux distribution is that you don’t have to reinvent the wheel. You can develop optimizations for low screen resolutions, low power processors, and other hardware that comes with netbooks. The problem is that every time a new version of Ubuntu, PCLinuxOS, or another distribution comes out, you either have to block all the updates or make sure that you’ve updated all of your code that might be incompatible with the next major release. And Ubuntu, for example, pushes out a new release every six months. That makes a lot of work for the folks who work in their free time to maintain projects like Eeebuntu.

And Eeebuntu developer Andrew Wyatt has apparently decided he’s had enough. A new version of Ubuntu is due out on October 29th, and Wyatt notes that Eee PC 900 users who try to upgrade will likely be greeted by blank screens when they boot their systems due to errors in Ubuntu 9.10’s Intel display drivers.

Wyatt lists a number of other problems, but his major complaint is that Ubuntu 9.10 is riddled with problems that could affect netbook users, and Eeebuntu users will likely blame the Eeebuntu devs, not the folks at Canonical that pushed out Ubuntu 9.10. Wyatt says it feels like Canonical is moving backward, as things that worked just fine in Ubuntu 8.10 are no longer working out of the box and developing Eeebuntu is something of an uphill battle.

In the end, Wyatt decided to quit developing for Eeebuntu. Now, he’s not the only developer on the project, so this doesn’t mean the project is necessarily dead. But it is a setback.

17 replies on “The problem with independent netbook Linux distros”