Over the past few years Chinese PC maker One Netbook has released a bunch of mini-laptop computers in a range of sizes and styles. But the company’s next device will be a little different.

The upcoming One XPlayer is a Windows PC shaped like a handheld game console. It has a touchscreen display in the center, game controllers on the sides, and an Intel Tiger Lake processor under the hood. One thing it doesn’t have? A physical keyboard.

One Netbook posted a short teaser to Chinese video site Bilibili today, and the company plans to share more details in the coming days. 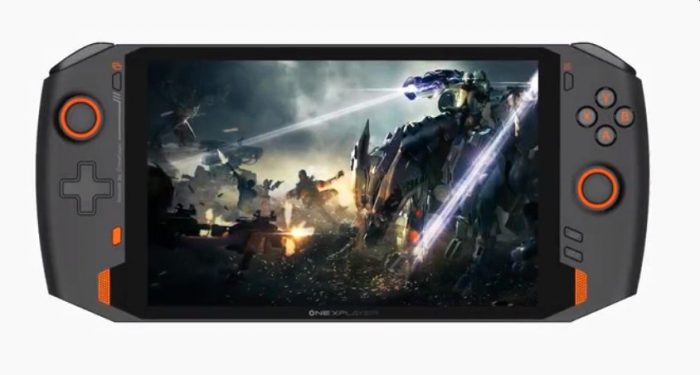 But the new One XPlayer drops the physical keyboard for a more compact design, and since the game controllers are integrated rather than detachable, you shouldn’t feel any flex while holding the system. It’s also expected to ship with more powerful versions of Intel’s 11th-gen processors.

The One XPlayer is expected to be available with Intel Core i5-1135G7, Core i7-1165G7, and Core i7-1185G7 processor options. That’s a step up from the Core i5-1130G7 and Core i7-1160G7 chips available in some of the company’s other recent computers, although when reviewing the One Mix 4, I found that the real-world performance differences aren’t all that great.

Here’s what we know about the One XPlayer’s specs so far:

The XPlayer also looks similar (but not quite identical) to a new device coming soon from China’s Tencent Games, and One Netbook has announced it’s holding an “internal device test meeting” at a Tencent building in Shenzen on March 28, suggesting the two companies may be working together.

One Netbook isn’t the only company playing in the mobile gaming PC space. When the One XPlayer arrives, it will compete with a handful of other devices that are already shipping, including the GPD Win 3 (5.5 inch display, slide-out capacitive touch keyboard, and up to an Intel Core i5-1165G7 processor) and AYA Neo (7 inch touchscreen-only device with AMD Ryzen 5 4500U).

via One Netbook Discord channel