Google pulled the plug on Google Reader last summer, and the world didn’t end. But a lot of folks who had been using the cloud-based RSS reader had to scramble to find a new solution. It seems like Feedly picked up the lion’s share of those Google Reader refugees, but it’s not the only game in town.

The Old Reader is a feed reader that looks and works a lot like the classic version of Google Reader. While it buckled under a traffic surge last year, the web app is now under new ownership, and it has a business plan.

It’s now a freemium service. You can use it for free if you subscribe to 100 feeds or fewer. Power users can now sign up for Premium accounts. 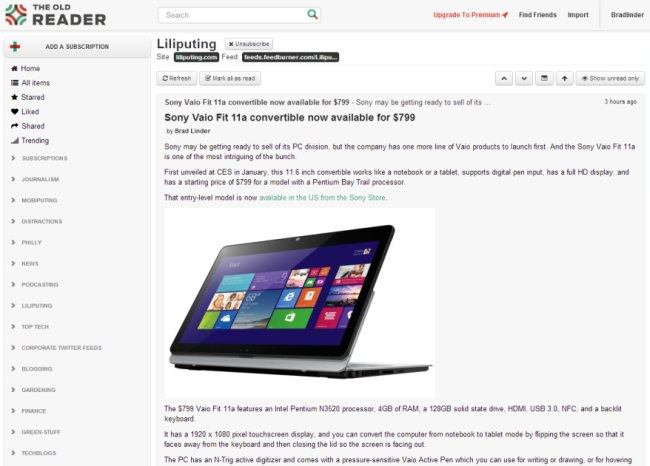 The Old Reader Premium lets users subscribe to up to 500 feeds, store posts for 6 months, and access advanced features including full-text search, faster feed updates, and integration with Instapaper and Readability.

Those prices are cheaper than the $5 per month or $45 per year you’d have to pay for a Feedly Pro account. On the other hand, Feedly doesn’t cap your feed subscription count and offers an API that for third-party apps including a number of popular mobile feed readers.

Update: The Old Reader also has an API that supports third party apps. Thanks fepegeuu!

Still, it’s nice to see a bit more competition in the cloud-based RSS feed reader space. It helps keep the major players on their toes and helps ensure that if there’s another feed reader-pocalypse, users will have another place to go.

Digg Reader, NewsBlur, Feedspot, and BazQux are other online feed readers that have a bit of a fan base.

2 replies on “The Old Reader gets a business plan, launches Premium accounts”