The Open Book Project from developer Joey Castillo is an ongoing effort to design open hardware eBook readers that anyone can assemble from parts and program on their own… but it does take a fair bit of know-how to actually build a device that has as many as 114 different parts.

So Castillo has been working to design a simpler version, and now he says the next version of the Open Book will be something you can build using 35 to 45 parts (depending on whether you want all the bells and whistles).

The new version will also use a new printed circuit board designed to work with the new Raspberry Pi Pico board.

That’s the newest (and cheapest) product from the Raspberry Pi Foundation. It’s a $4 board with a RP2040 microcontroller featuring a 133 MHz dual-core AQM Cortex-M0+ processor. It’s designed to be an inexpensive, low-power chip with low-latency I/O and analog input making it a better solution for some simple hardware projects than a full-fledged Raspberry Pi Zero, Compute Module, or Model B computer.

Castillo calls the new Pico-based eReader the Open Book Abridged Edition and like other versions of the Open Book, it included a custom printed circuit board that has documentation written on the board itself, explaining how power, battery, input and output, buttons, and other features work. There’s even a guide that explains what each of the board’s GPIO pins does and information about where the additional hardware should be soldered to the board and how it works. 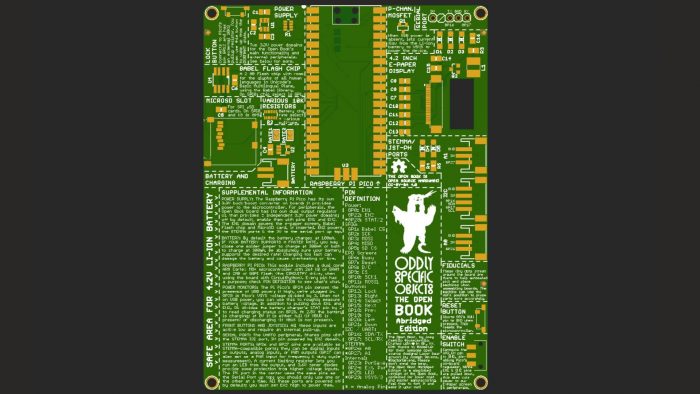 So we know that the board is designed to work with a 4.2 inch ePaper display, a microSD card reader, and a 4.2 volt Lithion-Ion battery, among other things.

Castillo hasn’t announced a price or bill of materials for the 35+ components needed to make an Open Book Abridged Edition device, but previous-gen Open Book printed circuit boards sell for $15 each.