PlayMG is selling an Android device with a 4 inch screen, a 1 GHz processor, and Google Play Store support. But The MG isn’t a phone. Instead it’s a handheld gaming system that runs Android 4.0 Ice Cream Sandwich.

The MG is scheduled to ship in early November. It’s available for pre-order now for $149. 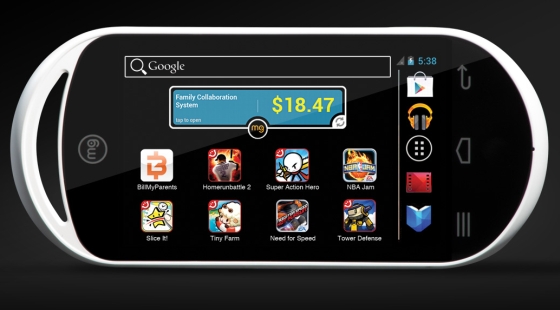 If you already have an Android smartphone you probably don’t need this device. It’s basically got the specs of a phone from a few years ago. But it’s cheaper than most phones, and you don’t have to pay for a data plan to use it. PlayMG is targeting young folks looking for a portable gaming console — the same folks who might otherwise be looking at an iPod touch.

PlayMG also includes tools that let parents see what games and other apps their kids have been using.

The developers tried to fund their project through a Kickstarter campaign a few months ago — but failed to raise even a tenth of the $950,000 goal. That doesn’t seem to have stopped PlayMG from taking orders for the product.