Lenovo is one of the world’s top PC makers. The company also makes phones, but most of the models it sells outside of China come from its Motorola subsidiary (Lenovo bought Motorola in 2014).

Now the company is bringing its two sides together with the awkwardly named Lenovo ThinkPhone by Motorola. As expected, it’s a business-class phone that borrows some design cues from the company’s iconic ThinkPad laptop line. The phone is also positioned as a business-class device that can be a companion for your PC. 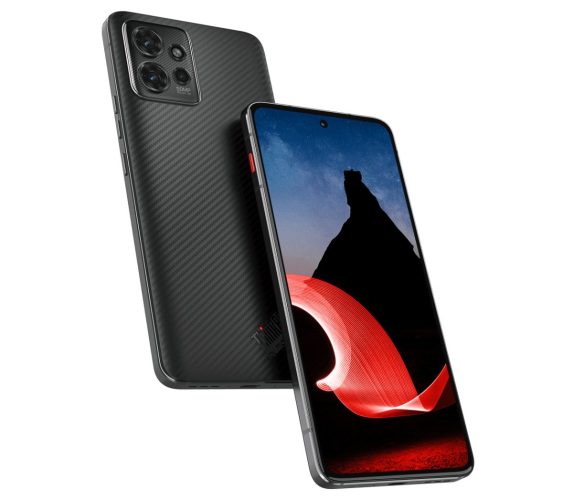 The phone is designed to be sturdy with an aluminum frame and an Aramid fiber back cover that’s designed to look like the carbon fiber used in some of Lenovo’s premium laptops. The 6.6 inch FHD+ pOLED display features Corning Gorilla Glass Victus, and the phone is IP68 rated for water and dust resistance and should survive shocks and drops from up to 1.25 meters (4.1 feet).

There’s also a ThinkPhone logo on the back that’s clearly inspired by the ThinkPad brand, and a customizable Red Key button that you can use to quickly fire up a frequently used app or service.

Not only does the phone share a physical design language with ThinkPad laptops, but it’s also meant to be paired with them. Lenovo’s “Think 2 Think” software is based on Motorola’s “Ready For,” and allows you to automatically connect your phone and PC over WiFi when they’re near each other. Once connected, you have access to:

There’s also a Moto KeySafe processor that Lenovo says is a separate chip that isolates your passwords, PINs, and cryptographic keys in a separate environment from the rest of your Android operating system for an added layer of security.

In terms of specs, the ThinkPhone falls somewhere in between flagship and upper mid-range territory. It’s powered by a Qualcomm Snapdragon 8+ Gen 1 processor and features a 6.6 inch, FHD+ pOLED display with a 60 Hz refresh rate, 8GB to 12GB of RAM and 128GB to 256GB of storage.

The ThinkPhone has a 5,000 mAh battery that Lenovo says provides up to 36 hours of battery life and comes with a compact 68W USB-C power adapter that can also be used to charge a laptop or other gadgets.

The phone does not have a microSD card slot or headphone jack.

Lenovo and Motorola haven’t announced pricing yet, but the ThinkPhone should be available in US, Europe, Latin America, the Middle East, Australia, and select countries in Asia in the coming months.