Apple unveiled a new iPad today with a higher resolution display, a better camera, a new CPU, and support for 4G LTE. But that doesn’t mean Apple is killing off the iPad 2. It’s just dropping the price. 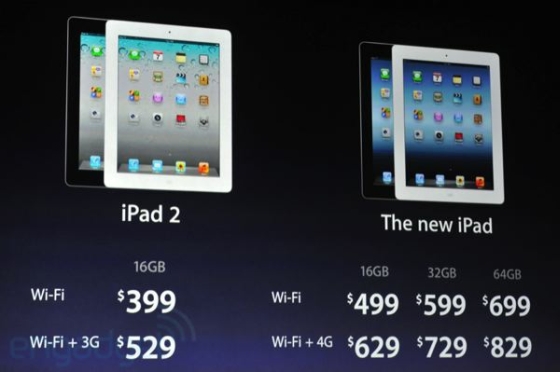 I suspect that refurbished models will be available soon for even less money.

The iPad 2 doesn’t have the retina display or improved camera available in the new iPad, so some apps may not look as good on the iPad 2 as on the newer model. But there are still hundreds of thousands of apps available for the iPad 2, so it makes sense for Apple to continue selling the cheaper tablet.

The move may also help Apple fend off competition from cheap tablets such as the Amazon Kindle Fire and Barnes & Noble NOOK Tablet.

Even at $399, the iPad 2 is still twice as expensive as a Kindle Fire. But Apple’s tablet has a larger screen, additional storage, front and rear cameras, and optional 3G, not to mention many more high quality apps than Amazon’s $199 Kindle Fire.

One thing Apple did not do today was introduce an iPad with a smaller screen. There have been rumors floating around for months suggesting that Apple would introduce a model with a 7 or 8 inch screen to compete with cheaper, smaller tablets. But either the rumors are untrue, or Apple simply isn’t ready to announce an iPad mini yet.

Apple, like many other companies, also probably works on prototypes for products that never come to market. So it’s possible that the rumors are simply based on unreleased prototypes.