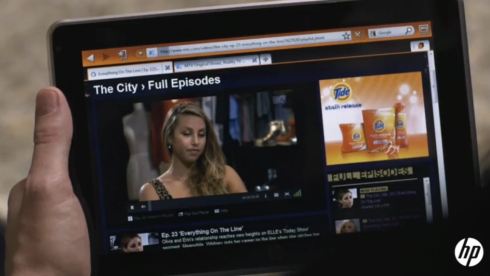 Looking for an alternative to the iPad that looks enough like Apple’s tablet to fool your friends into thinking you have one — until they see you start tapping on a start menu or playing Flash video? Then it looks like the upcoming HP slate might be the way to go.

HP has released a promotional video that markets the slate pretty much exactly the same was as Apple is marketing the iPad — except the HP slate will play web video from sites like Hulu, as you can see in the promotional video.

To drive home the point a bit more, the folks at Adobe have put out a five and a half minute video showing the tablet running Flash and Adobe AIR, which opens the tablet up to a whole world of applications that aren’t available on the iPad of iPhone.

You can find both videos after the break.

Of course, none of this should be surprising, because the HP slate has an x86 processor and runs Windows 7 — which means it can run pretty much any Windows application. It features the touchscreen features of Windows 7 including a rather awkward looking on-screen keyboard and multitouch gesture support for zooming, rotating, and performing other actions.

We still haven’t seen final pricing on the HP slate, but something tells me it ain’t going to come cheap. And with an x86 processor and a desktop operating system, I’m guessing we’ll be lucky if the HP slate gets half the battery life of the iPad. But hey, it supports Flash.

24 replies on “The HP slate: Imagine an iPad that plays Flash, runs Windows 7”