Phones running Ubuntu Phone OS could be available as soon as October. Canonical founder Mark Shuttleworth tells the Wall Street Journal that the first phones running the software “will be available in two large geographic markets” that month, but he wouldn’t say which markets.

It’s not clear if that includes the US, but the company wants to get into the US smartphone space eventually. 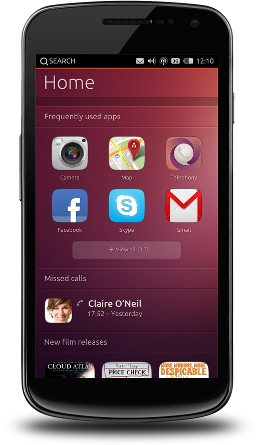 Ubuntu Phone OS is a new Linux-based operating system optimized for touchscreen phones. It won’t run apps designed for the desktop version of Ubuntu — at least not at first. But it features a user interface that bears a striking resemblance to the Unity UI in Ubuntu for laptop, desktop and tablet computers.

The operating system is also based on open source software and is designed to run apps written in HTML5 or QML.

Eventually Ubuntu Phone OS devices will be capable of functioning as full desktop computers. Plug in a mouse, keyboard, and monitor and you’ll be able to run desktop Ubuntu apps such as LibreOffice. Unplug your phone and put it in your pocket, and you’ll only see the mobile user interface.

But at launch the OS is expected to have some core apps built in, including apps for media, social networking, and communications. But an app store might not be available until after the first phones ship.

There will apparently be a terminal app  for folks that are comfortable using a command line.

3 replies on “The first Ubuntu smartphones could launch in October”