One of the first Firefox OS tablets could be coming to America soon. Last month Mozilla’s Asa Dotzler showed off Firefox OS running on an InFocus New Tab F1 tablet, and now the F1 has made its way through the FCC.

InFocus is better known for making projectors than tablets, but the InFocus F1 is already available in some parts of the world as a 10 inch Android tablet. The Mozilla version has the same hardware, but it’ll ship with Firefox OS software. 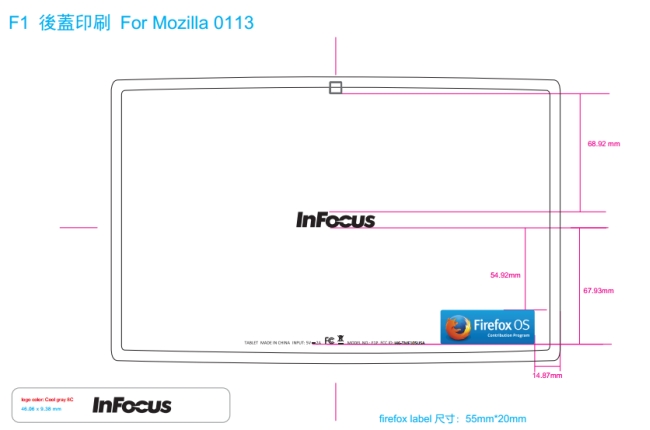 You can find photos and test results for the InFocus F1 at the FCC website, but the user manual is for the Android version of the tablet. We know this is a Firefox OS model though, thanks to the FCC label which refers to the tablet as a the F1 for Mozilla and includes a Firefox OS logo.

Firefox OS is an operating system based on the open source Firefox web browser. It’s designed to run apps written using web technologies including HTML5, which theoretically allows the platform to be even more open and accessible to third-party developers than market-leader Android… although Mozilla is primarily marketing Firefox OS to device makers and wireless carriers as a platform that gives them more control over their devices without ceding authority to Google.

Still, the platform has a lot of potential for open source enthusiasts. While Android is generally developed behind closed doors and the source code is only released when Google thinks it’s ready, development of Firefox OS and the open source version (called Boot 2 Gecko) happens in public.

5 replies on “The first Firefox OS tablet hits the FCC”