It’s also the first Chrome OS tablet to ship without a keyboard. It features a new user interface that’s been optimized for touch devices and as I noted in my in-depth review, the Acer Chromebook Tab 10 provides a first look at the future for tablets with Google software, since you can run Android apps, Linux apps, and the full Chrome web browser on this single touchscreen device.

There’s one small catch though: Acer has repeatedly said that the tablet is aimed exclusively at the education market. So while it may be the first Chrome OS tablet, it’s not necessarily the first one you should buy if you’re not a school.

That said, if you want one, now you can get one. The Chromebook Tab 10 is available for purchase from several mainstream and business-to-business retailers. 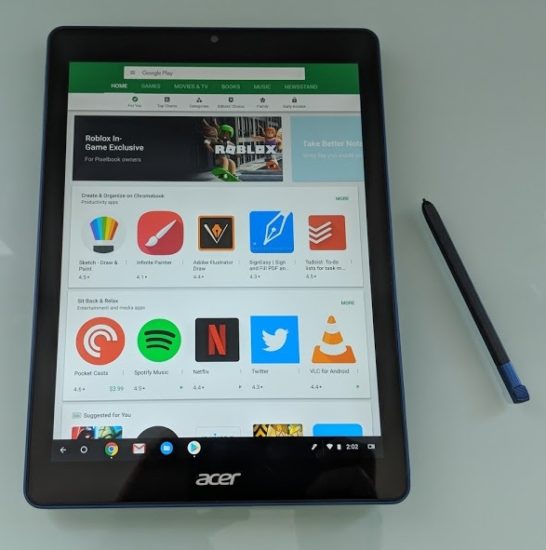 Newegg is selling the tablet for the estimate list price of $330. So is Promevo. CDW has it on sale for $340. And Amazon has it for around $350 and up, through several third-party sellers.

Since this is a tablet designed for the education market, Acer focused more on durability and usability than sleek design. And since the tablet has a relatively pokey ARM-based processor, I found that performance on this model is less than stellar if you want to do any serious multitasking.

That said, the Acer Chromebook Tab 10 is about half the price of the only other Chrome OS tablet that’s anything like it right now: the HP Chromebook x2 which comes with a detachable keyboard.

Update: After this post was published, Acer reached out to say that while the Chromebook Tab 10 is available to resellers, the primary target is “K-12 schools that have standardized on Chrome and are looking for an easy-to-use, durable, and portable device” that can be used and managed along with any other Chrome OS products that school may already be using.

3 replies on “The first Chrome OS tablet is now available for $330 and up (From Newegg, Amazon, or CDW)”