The Epic Games Store made a splash when it first launched as a Steam competitor in early 2019, at least partly due to Epic’s decision to give away at least one game for free every week. But now it looks like Epic isn’t stopping with games. 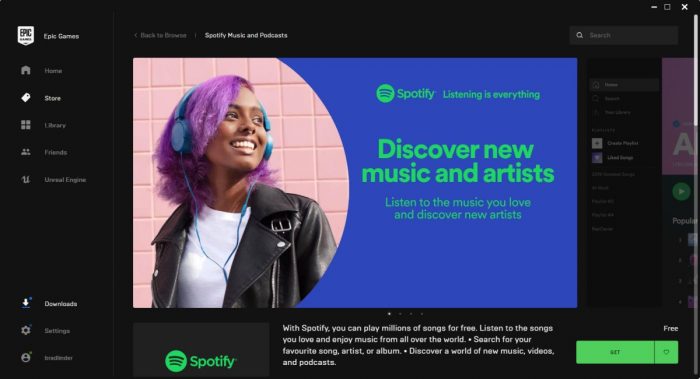 It’s not like it’s tough to install Spotify on a Windows PC. The app is free to download and run (although you’ll need a subscription if you want to listen ad-free). And the Spotify app is also available from the Microsoft Store, which is baked into the Windows 10 operating system.

But I suppose if you’re already using the Epic Games Store to manage your game purchases and downloads, the ability to grab other applications from the same place could simplify things… particularly if you’re setting up a new computer and want to quickly reinstall all the apps you’d used on your previous machine.

It’s unclear at this point whether the addition of Spotify to the Epic Games Store is a one-off, or if it will be the start of a trend. It’s also unclear whether the name “Epic Games Store” will start to sound as silly as “Google Play Store” if the storefront eventually starts to fill up with apps that aren’t games.

But if Epic does manage to attract app developers to its platform, it could give casual gamers or even non-gamers a reason to use the company’s app store.