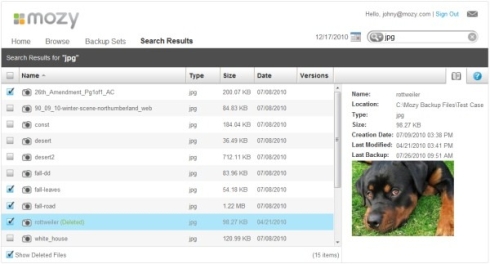 I’m a big fan of online backup services such as Carbonite and Mozy, and I have been for a few years now — ever since I accidentally lost all the data on my wife’s computer by backing everything up to an external hard drive that turned out to be faulty before reinstalling Windows. Having all of your important data stored safely in an online storage locker where you can access it even if your computer is stolen or your house burns down is certainly worth a small monthly or annual fee.

Unfortunately there’s on major problem with storing your data off-site using an online service: You’re at the whim of the service provider. This week Mozy announced that it was killing its popular unlimited backup plan and raising its prices.

In other words, if you’re backing up 200GB of data, it will cost you $17.49 per month… or about $210 per year. That’s almost 4 times what you would have paid previously. Obviously the more data you have, the more like you’re going to be shopping around for a new online backup service.

The new pricing is already effective for new customers. The change kicks in for existing subscribers on March 1st, while customers who have already signed up for a long-term unlimited plan will be able to keep it until the end of the contract. So if you paid for a two year plan last week, you have nothing to worry about… for two years.

The only upside I see to Mozy’s new pricing is that if you opt for the $10/month plan you can backup data from up to three computers instead of just one. So you don’t need to sign up for separate accounts for multiple PCs in your household.

It’s likely that many users will find that they already store less than 50GB of data in their online backup, which means that under Mozy’s new plan they’ll experience a price hike of about $12 per year, which may be nothing to get excited about. But if you need more space than that and are looking for an alternate service, you might want to check out one of the following:

Of course, if you’ve lost faith in online services, you could just backup your data to an external hard drive and/or synchronize your data between machines on a private network. But there’s a lot that can go wrong with that system.

A few years ago I wrote an article for Download Squad asking readers what they used to backup their data. The discussion was pretty interesting. What about you? What’s your backup solution?

9 replies on “The down side of online backup: Mozy kills unlimited storage plan”