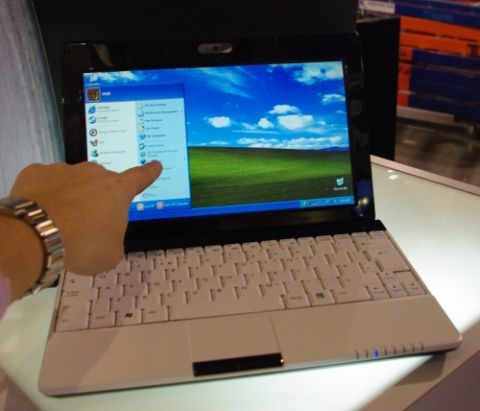 So yesterday night, Laptop Magazine’s Joanna Stern snuck onto the CES floor before the show had officially opened. And she happened to get a peek at a new touchscreen version of the MSI Wind U120H netbook.  So when I hit up the MSI booth this morning, one of the first thing I looked for was the touchscreen Wind. But it was nowhere to be found.

I asked two different booth representatives and Andy Tung, MSI’s marketing director. None of them knew where it had gone (actually only Andy even seemed to realize that it had ever existed).

Tung says that touchscreens aren’t a high priority for MSI at the moment. But as we get closer to the launch of Windows 7, which will support touchscreen capabailities, he says the company will bring something to market, possibly later this year.

As for the incredible vanishing prototype, Stern reported that the unit she saw had just a basic touchscreen, much like the ones hackers have been adding to netbooks for ages. The screen didn’t rotate and there didn’t seem to be any additional features. And Tung says the company doesn’t have any plans to create an Asus Eee PC T91-style convertible anytime soon.