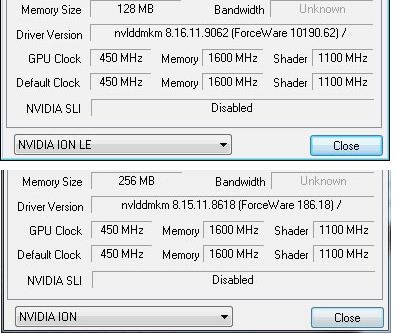 Blogeee compared the GPU-Z readouts for an Acer Aspire Revo 3600 nettop and a Samsung N510 laptop. The former has NVIDIA ION graphics while the latter has ION LE. Basically both showed the same figures for clock, memory and shader sped. The Acer computer has 256MB of video memory while the Samsung model has 128MB, but that’s likely because the Aspire Revo has 2GB of RAM while the Samsung N510 has just 1GB.

In other words, if you don’t need DirectX 10 support, you should be fine with either chip. On the other hand, if you do plan to play some games or run other programs that require DirectX 10, you’ll probably want to stay away from the ION LE.

5 replies on “The difference between NVIDIA ION and ION LE? Not much”