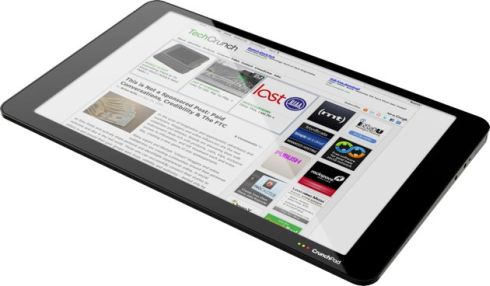 For much of the past year, TechCrunch founder Michael Arrington has been working with a small group on a pet project called the CrunchPad. It was designed to be a 12 inch tablet style device for surfing the web from a couch. While Arrington always said the device was supposed to be a web-only device with little local storage, and the browser as the most important element, as the project started to come together it started to look more and more like a netbook. The latest prototypes had Intel Atom processors and were probably going to be ripe with opportunities for hackers looking to install alternative operating systems.

But as far as I was concerned, there were always a few major flaws in the concept. First, the idea of a touch-only device for interacting with the web feels very 2004 to me. The web has come to be an interactive medium, and text input is crucial for sending email, writing blog comments, updating social networking sites, and performing other actions. While touchscreen phones like the iPhone have shown that people can use an on-screen keyboard to perform these actions, I have yet to meet a person that can type 100 words per minute with their thumbs.

Second, the CrunchPad was expected to sell for around $300. With netbook prices falling, you can pick up a full fledged mini-laptop with a keyboard, a larger hard drive, and well… everything else you would expect from a computer.

So I wasn’t at all surprised to read today that the CrunchPad project is, for all intents and purposes, dead. I was a bit surprised to find out why. It had nothing to do with the price, demand for the product, or any other external force. Rather, the company that Arrington had partnered with to produce the device got into a dispute with Arrington. While only one side of the story is available at the moment, Arrington basically says that they tried to kick him out of the project altogether and sell it under a different name.

This doesn’t exactly spell the end of the internet tablet concept. Apple is expected to launch a tablet style device sometime next year, although all we have to go on is rumor and speculation at the moment. Microsoft is also expected to introduce a tablet-style device based on a journal or diary-like paradigm. I’ll be curious to see how well either does. Both are positioned as new types of computing devices.

They aren’t designed to replace a desktop, laptop, or cellphone. I’m not convinced that people are clamoring for yet another alternative way to connect with the internet, but I am convinced that if you hand somebody something that looks more like a computer than a consumer electronics device (such as a cellphone), they’ll expect it to act like a computer with a full desktop operating system. So I think the success of these upcoming tablets will rely greatly on the ability of companies to distinguish them from existing computers and present usage scenerios that make sense for users.

29 replies on “The CrunchPad tablet is dead, is anybody surprised?”