Wondering why you might want to spend $1299 or more on a laptop that runs Chrome OS, an operating system based on a web browser? How about because the Chromebook Pixel‘s not limited to just running Chrome OS?

Googler Bill Richardson explains that Google packed a copy of SeaBIOS into the Pixel, making it easier to boot an alternate operating system on this machine than on any other Chromebook released to date.

Update: You can follow our guide for installing Ubuntu, Android, or other operating systems on the Chromebook Pixel. 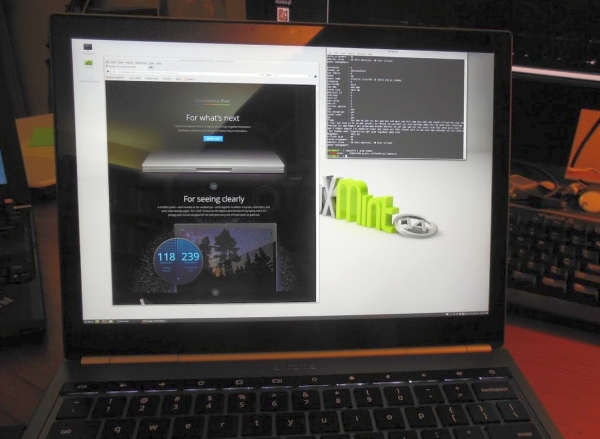 Basically all you have to do is enter developer mode on the Chromebook, download the disk image, copy it to an SD card or USB flash drive, and then reboot your system and choose to boot from the removable storage.

The Chromebook Pixel is designed to run Chrome OS, so not all hardware will be supported out of the box by other operating systems. The touchpad doesn’t work in Linux Mint yet, for instance. But Google is contributing upstream patches to the Linux kernel which means that soon you may be able to run any number of Linux-based operating systems on this premium notebook.

While I’m sure Google would prefer if you used Chrome OS on the $1299 notebook, many folks might find a laptop with a 12.85 inch, 2560 x 1700 pixel display, an Intel Core i5 Ivy Bridge processor, 4GB of RAM, and 32GB or more of storage to be a bit more useful if it was running an all-purpose operating system like Linux Mint.

Richardson also points out that there’s a way to run Ubuntu Linux and Chrome OS side-by-side using chroot. In other words, both operating systems are installed side-by-side, and you can choose which directory to use as the root directory, thus switching between Chrome OS and Ubuntu.

20 replies on “The Chromebook Pixel can run Ubuntu, Linux Mint, other distros”