Radxa’s latest single-board computer is a tiny system that measures just 65mm x 56mm (2.6″ x 2.2″). It’s called the Rock Pi E and it features a Rockchip RK3328, support for up to 2GB of RAM, and an eMMC socket and microSD card reader that you can use for storage.

With a starting price of $24, the little computer supports WiFi and Bluetooth, has two Ethernet jacks, a USB 3.0 port, and a 3.5mm audio jack plus a 40-pin header. What it doesn’t have is a dedicated video output, which makes the Rock Pi E more of an option for headless applications (you can use it as a file server or build a homemade router). 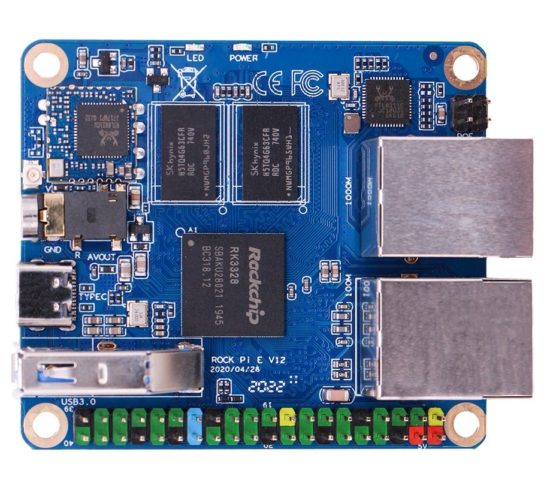 First introduced in April, there are now three versions of the Rock Pi E available for pre-order from Seeed Studio:

One of the little computer’s RJ45 ports supports Gigabit Ethernet connections, while the other tops out at 10/100 speeds. And the system also has a USB-C port, but I believe it’s only used used for power and not data.

Power can also be supplied with HATs designed to work with the 40-pin expansion header, since two of those pins support 5V DC power input, and two others support 3.3V input.

Meanwhile if you’re looking for something even smaller and cheaper, there’s still the Rock Pi S which was released last year. It has a less powerful processor and only a single Ethernet port. But it sells for as little as $10.