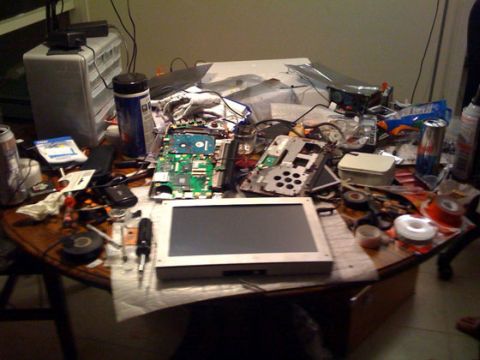 It’s been a bit over a month since TechCrunch founder Michael Arrington announced his plans for world domination a $200 internet tablet that does one thing, and does it well – runs a web browser. Arrington’s idea is that you don’t really need a full fledged operating system and the ability to run applications on some portable devices. All you need is the ability to surf the web and access web applications like Zoho or Google Reader. And once you decide that your hardware only needs to support a single application, it should be a lot easier to produce a cheap device.

Now after a month of silence, Arrington has shown a picture of a working prototype. I mean, the picture doesn’t show the computer on. And he hasn’t announced any details about the software (although, I’m pretty sure he wants it to run Firefox if it isn’t already doing so).But he says it works.

The final product will certainly look a lot sleeker than the image above, but apparently the development team needs to spend some time working on the software before working out the hardware details.

Oh, and the most exciting part? Arrington says it should be possible to produce the tablet within the price range he had been hoping for. It’s not 100% clear if that means you’ll be able to buy one for $200 or if it’ll cost about $200 to make one. But as long as the tablet has a decent display resolution, a useful touchscreen, and a long lasting battery, I can certainly see people paying between $200 and $300 for these.

Wht do you think? Would you buy an internet-only tablet, or do you prefer to have a little PC processing power in your portables?

6 replies on “The $200 TechCrunch tablet inches closer to reality”