But now Amazon is bringing support for text-to-speech back to the Kindle lineup with the launch of a new Kindle Audio Adapter.

Right now it looks like the only way to get this $20 accessory is to buy a Kindle Paperwhite Blind and Visually Impaired Readers bundle for $140. But that price includes a $20 Amazon credit… and hopefully Amazon will eventually sell the adapter as an accessory for existing Kindle owners. 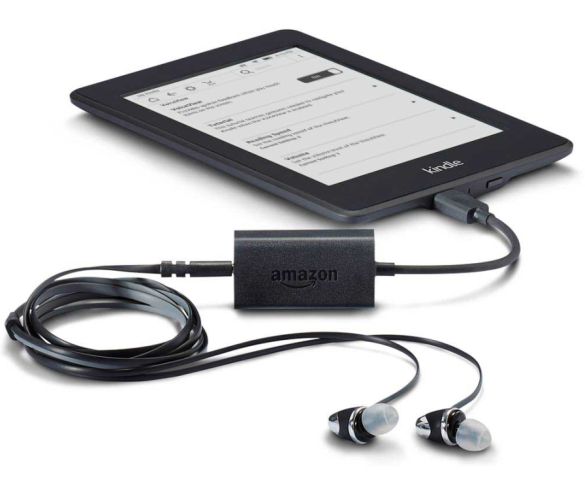 The Kindle Audio Adapter is a small box with a headphone jack on one end and a short USB cable on the other. Plug the USB connector into the port on your Kindle, connect a set of headphones or speakers, and you can use the new VoiceView feature.

Not only does VoiceView use Amazon’s text-to-speech voices to read eBooks to you, but there are also voice prompts that can help you navigate the device’s menus.

VoiceView supports adjustable reading speeds and it’s based on the IVONA speech tech acquired by Amazon a few years ago, which is, quite frankly, a lot better than the text-to-speech voices available for my aging Kindle Touch eReader.

Generally speaking, eBooks read by text-to-speech software don’t sound as good as those narrated by professional voice actors. But professional narration isn’t available for all eBooks, and audiobooks can be substantially more expensive than text-based eBooks. VoiceView at least gives another option for listening to books rather than reading them.

While Amazon is positioning the new Kindle Audio Adapter and VoiceView system as a bundle for visually impaired readers, I can imagine that the tech will appeal to plenty of other people who would at least occasionally prefer listening over reading. Unfortunately, the audio adapter is really aimed at sight-impaired users, and there’s no way to turn off the audible navigation cues if all you want to use the audio adapter for is listening to eBooks ready aloud.

Update: You can also build your own DIY adapter. I’m not sure I’d recommend going that route unless you already have the necessary components, but you can check out my video to see how VoiceView on the 7th-gen Kindle Paperwhite compares with Text-to-Speech on the Kindle Touch.

via The Kindle Chronicles