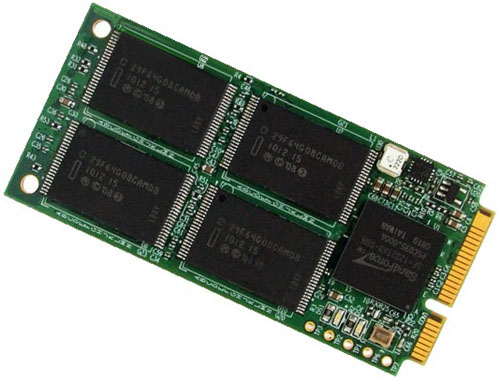 So far, the best performing Mini PCIe solid state disk for Asus Eee PC netbooks that use SSDs has been the Runcore Pro IV series, with the Indilinx controller. This is due in part to the fact that up until now, no one else has utilized a better controller for a Mini PCI-E SSD.  But this has changed with the recently released Renice Technology X3 (K3VLAR) series 70mm Mini PCI-E SSD, with a SandForce SF-1222 controller, which  the good folks over at My Digital Discount have let me review with a pre-release 60GB prototype of the Renice drive.  I’ve posted the detailed benchmark results at the EeeUser Forum.

SandForce based SSDs have up till now only been offered in 2.5″ form factor SATA drives, and a few also in 4x PCI-Express packages.  But Renice Technology is the first to offer a Mini PCIe version of the drive.  That’s significant considering how SandForce based drives have become one of the most highly rated in both consumer and enterprise class drives.

However, the Eee PC systems that this Renice drive is intended for are limited to SATA 1.0 (1.5 Gbit/s or 150 MB/s) and there’s additional overhead that reduces actual performance to a little below 130 MB/s.

That means you won’t be reaching the drive’s reported max speeds with these systems, and you may not notice a big difference between the Renice drive and a Runcore Pro IV because of this.  But the benchmarks I ran still clearly show an advantage for the Renice drive despite the SATA limitation and side by side you can notice some difference — especially for smaller read/write cycles which is where these drives really boost the performance for Eee PC’ netbooks.

The Renice-Tech Mini PCI-E 70mm SSD reference specifications also indicated the drive is capable of even greater performance than it would show netbook designed to use this sort of solid state disk.

So, since I have the RunCore 70mm/50mm Mini PCI-e SSD to 2.5″ SATA II Converter Adapter, I decided to also test the Renice drive in a Eee PC 1000HE,  as a control to see how the drive compares in a netbook that normally uses a hard drive, and finally in a SATA II (3 Gbit/s or 300 MB/s) compliant desktop system to check the full potential of the drive and compared it to a Runcore Pro IV 32GB 70mm Mini PCI-E SATA SSD for comparison.

The results show significantly greater potential for the Renice drive than the Runcore. 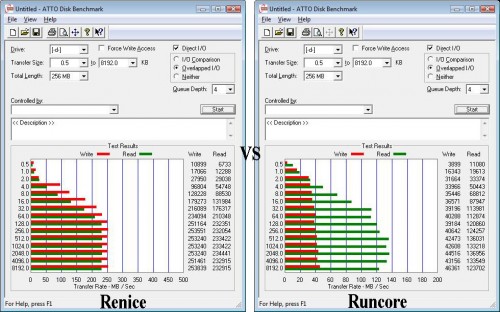 Of course, results will vary depending upon the capabilities and efficiency of your particular system but you can also check out a more detailed benchmark testing done by The SSD Review, which were done on a more powerful Core i7, with a motherboard that supports SATA 3 (6GB/s), system that showed results more consistent with the Renice-Tech reference specifications and match up pretty well to the Renice 2.5″ SATA drive.

Overall, I was quite impressed with the performance of the Renice drive and would recommend it to anyone considering upgrading their 70mm Mini PCI-E SSD equipped Eee PC’s.  The drive may also prove useful for those wishing to upgrade and mod one of Asus’s present line of Eee PC’s.  The Seashell design is thinner than previous models and leaves very little room for modding of these systems.  But a fast Mini PCI-E SATA SSD drive like the Renice-Tech drive, in combination with the previously mentioned Runcore adapter, will take up only about half the space of a traditional 2.5″ SATA drive while still providing you with a fast SSD upgrade.

Incidentally, Renice Technology has also added a listing for a 50mm PATA Mini PCI-E SSD.  It’s a PATA disk instead of SATA though, and is using a Eastwho EWS600 controller instead of a SandForce.  So performance will be significantly less than the SATA 70mm drive but unlike the 70mm drive the 50mm drive is intended for more generic UMPC’s and not for a specific brand system like the Asus Eee PC.

Update: There was a capacity discrepancy with the original advertised drive capacities that turned out to be because these drives reserve part of the capacity for an Overprovisioning feature that helps ensure drive performance by using the reserve for writes when the drive is near full and to replace dead sectors as they develop.  For the 64GB and 128GB this results in a 7% reduction in usable capacity.  So you only get 60GB and 120GB respectively.  While the 32GB drive seems to reserve 28%, for just 23GB of usable capacity.