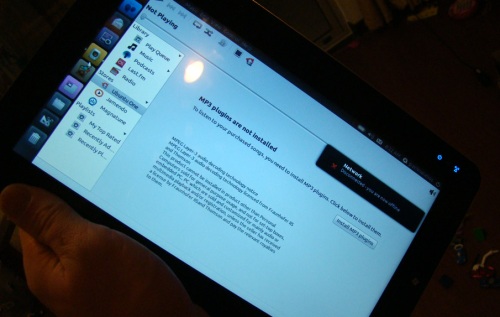 With Android tablets falling from the skies like so much 7 and 10 inch hail, it’s nice to see a few tablet models  running other operating systems hitting the market as well. Take the TENQ P07, which was spotted running Ubuntu 10.10 Netbook Edition.

The tablet sports a 10″ multitouch display, a 1.6Ghz Intel Atom CPU, 2GB of memory, and a 32GB solid state disk. That should make startup times lightning quick, as Ubuntu-maker Canonical has devoted plenty of effort to optimizing the operating system’s boot process for SSDs.

Gizchina has a few additional images, but no further specs or pricing and availability information has appeared yet.

The Ubuntu Netbook Edition software replaces the standard desktop and taskbar look and feel of Ubuntu Linux with a program launcher designed for devices with small displays. Originally that meant netbooks, but 10 inch tablets also seem to fit the bill nicely.