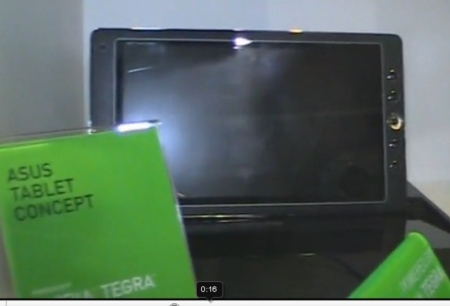 Tucked away behind a protective glass case at the NVIDIA booth at CES earlier this month, there was a concept device from Asus. In theory, it’s a small touchscreen device powered by the NVIDIA Tegra 2 platform which bundles a low power ARM processor with Tegra 2 graphics. The Tegra 2 platform is powerful enough to handle 1080p HD video playback, and that includes Flash video.

Unfortunately, I never got a chance to see anyone turn the tablet on, and there was no way to know whether we were looking at a real product or just a mockup. But DigiTimes reports that Asus will officially launch a Tegra-powered tablet called the Eee Pad at Computex in June.

The tablet could sell for about $500 or less. Asus is also expected to launch a few eBook readers this year, but the Eee Pad would offer more multimedia capabilities thanks to the Tegra 2 graphics.

Jkkmobile shot a video of the Asus tablet at CES. And while it’s hidden behind glass, at least you can get a good look at the outside in the video embedded after the break.