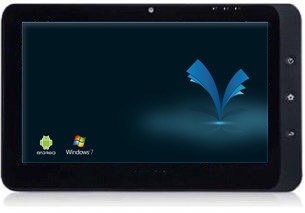 TegaTech has begun shipping its new Tega v2 tablet, and a handful of reviewers are starting to post their initial impressions. The computer was developed by long-time tablet enthusiast Hugo Ortega, and while its specs match those of a number of other recently launched Windows tablets, it looks like there are a few things setting this little guy apart.

Rob Bushway reports that the tablet has a professional look, excellent build quality and it’s super-thin. It also has a few buttons designed to make Windows easier to operate, including a Home button that you can press to bring up the desktop or long-press to bring up Ctrl+Alt+Del to login, kill tasks, or what have you.

He says the computer boots quickly, but only runs for about 3.5 hours on a charge.

Pocket Lint doesn’t have too much to add to Bushway’s notes… but the site does have a ton of great pictures of the tablet.

While earlier this week it looked like the Tega V2 was going to sell for close to $1000, it turns out there are actually a number of configuration options available at different prices.

The cheapest option currently available runs $688 for a model with 1^GB of storage, 1GB of RAM and no operating system. Meanwhile a top of the line model includes 2GB of RAM, 3G wireless, a 64GB SSD, and Windows 7 Professional for over $1250.

One reply on “Tega v2 Windows tablet now shipping for $799”