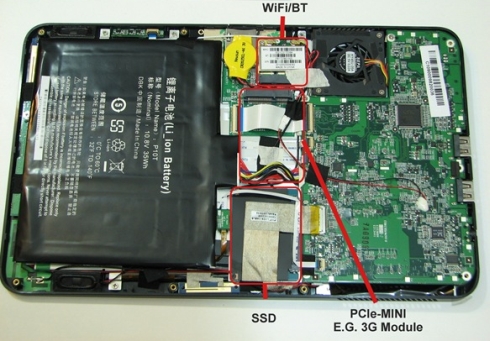 It seems like every few days someone launches another 10 inch tablet that’s essentially a netbook with its keyboard cut off. Many have similar specs (10 inch touchscreen display, 1.66GHz Intel Atom N450 processor, Windows 7), and several models actually seem to be based on the same design (ViewSonic ViewPad 100, Novatech nTablet, TegaTech Tega v2). So have you ever wondered what one of those little guys looks like with the cover taken off?

Now you can stop wondering, because Chippy at UMPC Portal got permission to take apart a defective Tega v2 review unit. While a netbook typically places the mainboard, storage, circuitry, and other goodies beneath the keyboard, a tablet has to pack everything behind th edisplay — and that includes the battery.

As you can see, the battery takes up nearly half the space, with some room left over for a solid state disk, wireless communications, and other components. You actually have to lift up the motherboard to find the processor, memory, and some of the other components.

It would be nice if someone could figure out a good way to build one of these tablets with  user replaceable battery like the ones we typically find on laptops. I know it might make the tablet a bit uglier and a higher capacity battery would probably add to the weight. But you’re probably not going to find a 10 inch Windows 7 tablet that can get 10 hours of battery life (or even 6 for that matter) until either we see some with better batteries or more efficient processors.

One reply on “Tega v2 dissected: Inside a 10 inch Windows 7 tablet”