Barnes & Noble’s may be getting ready to pull out of the Android tablet space by the end of next year. TechCrunch reports that Microsoft is seeking to acquire the NOOK business from B&N for about a billion dollars, but that the deal would largely be for the company’s digital bookstore, not tablets like the NOOK HD+ and NOOK HD.

That’s in keeping with a rumor that popped up a few months ago suggesting that the NOOK team would focus in the future on selling eBooks that you can read on phones, tablets, and other devices made by companies other than B&N. 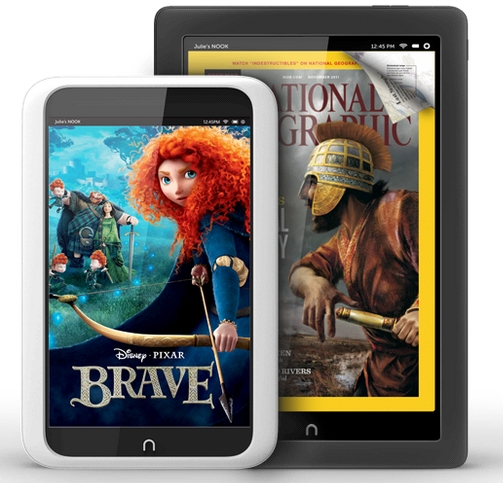 It’s likely that Barnes & Noble has never made a lot of money by selling tablets such as the NOOK Color, NOOK Tablet, and NOOK HD. Each tablet has been sold at a relatively low price, largely as a way to lock customers into the NOOK ecosystem so they’re more likely to spend money on books, apps, and other content.

But while a similar move seems to be working for Amazon, whose Kindle line of tablets are among the most popular Android tablets around, some recent moves by Barnes & Noble suggest the company has been changing its strategy.

Last week the bookseller launched a software update for the NOOK HD and NOOK HD+ that gives users access to the full Google Play Store. This makes it possible to choose from hundreds of thousands of apps. In fact, users can even install the Amazon Kindle app or buy books from the Google Play Store.

B&N is also running a Mother’s Day promotion with its latest NOOK tablets selling for as much as $90 off the list price.

That’s not quite the same kind of fire-sale pricing we saw when HP decided to pull out of the webOS tablet business. But it is a good indication that either B&N is trying desperately to get people to pay attention to its tablets, or that the company is trying to clear out inventory.

It’s kind of a shame, because the company’s tablets are actually pretty great. They have great displays, reasonably fast processors, and cases that are designed to be held in your hands for hours at a time during long reading sessions. The only real problem had been a limited selection of apps — but B&N addressed that by adding support for the Google Play Store recently.

If Microsoft does acquire the NOOK business though, and TechCrunch seems to have seen documents suggesting that’s a strong possibility, it’d make sense to shut down the Android tablet program to focus on software that can run on Android, iOS, and Windows devices.

Microsoft may have entered the hardware business itself in recent years with the Xbox game console and Surface tablets (not to mention the ill-fated Kin phone and Zune media player). But the company’s bread and butter is providing software for use on devices made by other companies.

The challenge will be getting customers to choose the NOOK app over competing eBook apps from Amazon, Google, Kobo and others. Without a dedicated NOOK tablet to lock customers into an ecosystem, B&N, Microsoft, or whoever runs the NOOK eBook business a few years from now will have to focus on things like price, selection, and special features.

Theoretically I like the idea of simply installing a few eBook apps on my phone or tablet and comparison shopping to find the best price on any book I want to buy. In practice, it’s kind of a headache to do that these days because when you want to browse your own bookshelf to find a book to read you’ll have to open multiple apps to see all the available titles. I doubt we’ll see Amazon, Kobo, Google, and whoever owns NOOK work together on a single bookshelf or eReader app that can access content purchased from any store. But it’s nice to dream.

2 replies on “TechCrunch: B&N to exit the Android tablet biz in 2014, Microsoft could buy NOOK division for $1 billion”