But Tap is something… different.

It’s a strap that basically turns your hand into a Bluetooth keyboard. Place the strap on your fingers and it’ll detect movement and send the data to your phone, tablet, smart TV, or smartwatch.

Tap Systems unveiled a prototype almost two years ago. Now the company is starting to ship the wearable wireless keyboard… to anyone who thinks it’s worth spending $150 on the gadget. 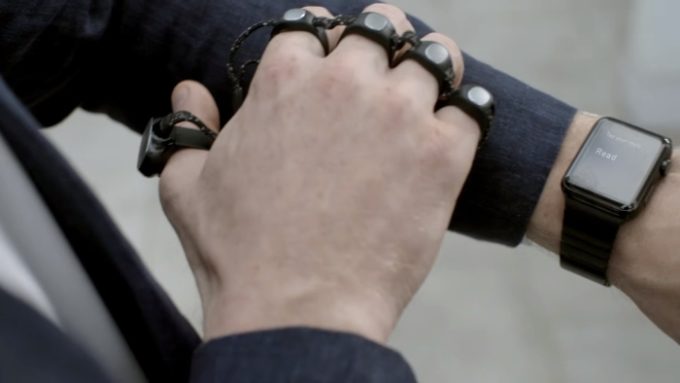 The company says Tap can be used to enter text, but also to perform mouse actions including scrolling, pointing, and clicking.

Of course, you can’t actually see a keyboard that doesn’t exist. So you’ll probably need to spend some time getting used to tapping your fingers against a table, desk, or other surface (such as your arm). Tap says “it takes users less than an hour to learn to tap using the TapGenius app.”

Compared with learning to type the first time, that’s not so bad. But compared with, you know… just typing on a regular keyboard, it sounds like a pretty high barrier for entry. But so does the $150 price tag.

Maybe the best usage case I can think of for this type of gadget is VR headsets: if you’re wearing a device that obstructs your vision, but which allows you to move through space, typing on any surface may be easier than typing on a physical keyboard that’s stuck in one place.

The Tap strap features a 45 mAh battery that’s good for up to 8 hours of use or 7 days of standby time and comes with a charging case with a 370 mAh battery that should let you charge the strap up to 8 times before you need to recharge the case.

Tap Systems says the strap is compatible with devices that support Bluetooth 4.0 or later, including phones, tablets, and PCs running Android 4.3 or later, iOS 9 or later, Windows 8.1 or later, and OS X Yosemite or later.