There’s been a bumper crop of mini laptops this year and right now I have a bunch of little laptops sitting on my desk with screen sizes ranging from 7 to 8.9 inches. The heaviest weighs about 1.5 pounds, while the lightest is 1.2 pounds and is literally small enough to slide into my pants pocket.

But I’ve also got a 14 inch Acer Swift 7 on my desk that has a much bigger display and a full-sized keyboard. Yet it’s still remarkably thin and light, measuring just 0.4 inches thick and weighing just under 2 pounds.

So I figured I’d do a comparison of the Acer Swift 7, GPD P2 Max, One Mix 3 Yoga, Chuwi MiniBook, and One Mix 1S Yoga before I have to start packing up some of these review units and send them away.

Is anyone seriously having a hard time deciding between the $440 One Mix 1S Yoga and the $1700 Acer Swift 7? Probably not. But they do represent two very different approaches to mobility — they’re both compact laptops that you might be more willing to take with you wherever you go than you would be if you only had a 6 pound gaming laptop.

Here’s a run-down of some key specs for each model. Note that the prices listed for the GPD P2 Max and Chuwi MiniBook are the current prices during crowdfunding campaigns. The prices will likely go up after the campaigns end. 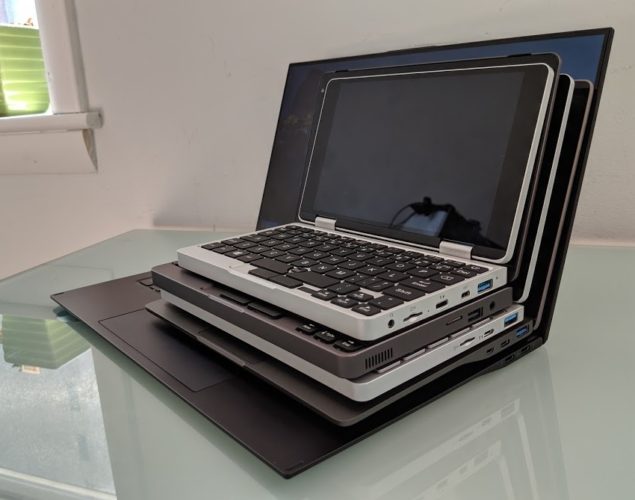 you can read my reviews/previews/first-looks for the models listed above here:

Note that there are multiple configurations available for some models — the One Mix 3 Yoga and Chuwi MiniBook I received are both entry-level models, while the GPD P2 Max review is for the high-end model. 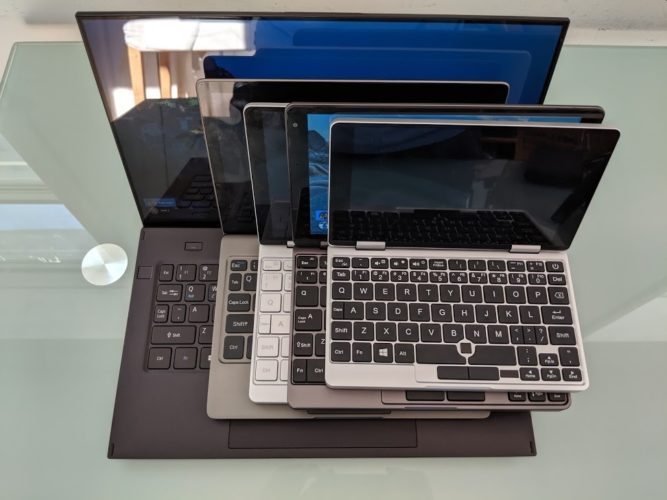 As for what it’s like to actually use the laptops, for the most part the biggest difference is that the Acer’s large screen and full-sized keyboard makes it a lot easier to user, but a lot tougher to slide into your pocket.

Multitasking can be a bit trickier on the smaller models, not because they lack the horsepower, but because it’s hard to squeeze multiple apps on the display without making yourself squint. And typing on the cramped keyboards is something that can take a little getting used to — although I was pleasantly surprised at just how much I enjoyed typing on the One Mix 3 Yoga’s little keyboard thanks to a series of mostly reasonable compromises the company made.

The Acer Swift 7 is the model in this group of the little laptops with a full-sized touchpad, but GPD did manage to make room for a small multi-touch trackpad beneath the keyboard. The smaller models all make do with optical touch sensors instead.

Despite having the largest display, the Acer Swift 7 is also the thinnest laptop… which might help explain why it has the least ports. Aside from its Thunderbolt 3 ports, it only has a 3.5mm audio jack. All of the smaller models have at least one USB-A port and some sort of dedicated HDMI output. Most also have microSD card readers (but not the GPD P2 Pocket).

The three smallest models are also convertible tablet-style devices with 360-degree hinges. And the One Mix 3 Yoga models feature optional support for a pressure-sensitive pen.

Only two of the five models I’ve tested lack backlit keyboards — the GPD P2 Max and One Mix 1S Yoga. All models have touchscreen displays. And three have webcams — the Acer Swift 7, Chuwi MiniBook, and GPD P2 Max.

The Chuwi MiniBook is the only model in this group that ships with eMMC storage, but higher-priced models also have a PCIe SSD. And there’s an access panel on the bottom of the laptop that lets you add your own SSD by removing a single screw.

So which of these little laptops is best? It really depends on what you’re looking for. They each have strengths and weaknesses.

The One Mix 1S Yoga is the smallest and one of the cheapest, but it’s also one of the last powerful. The One Mix 3 Yoga has the best keyboard I’ve tested on a 9 inch or smaller notebook, but it’s not quite as fast as some other models. The GPD P2 Max offers a pretty good mix of specs, but it’s not at all pocket-sized. And the Acer Swift 7 is remarkably compact for a laptop with such a large screen, but it’s also very expensive and gets mediocre battery life.

Oh, and there’s one more important thing to keep in mind — Acer is a major PC maker with a long history of delivering computers and offering customer support to customers around the globe. Chuwi, GPD, and One Netbook are all smaller Chinese companies with less experience selling products on the global market — and I’ve heard some customer service horror stories from folks who’ve bought these products and run into trouble trying to get repairs or returns processed. So there’s a little more risk involved with buying these mini-laptops, but until a top PC maker like Lenovo, HP, Dell, Acer, or Asus decide to produce a 7-9 inch laptop, these companies pretty much have the market to themselves.

Check out my reviews for more details.

If you’re interested in purchasing or-pre-ordering any of these little laptops, here’s where you can do that: