We’ve already seen that HP’s Open webOS software can run on a wide range of devices including the Samsung Galaxy Nexus smartphone, Asus Transformer Pad tablet, and B&N NOOK Color (although surprisingly I have yet to see anyone port it to run on the HP TouchPad).

But thanks to developer Ping-Husn Chen, you can now try out Open webOS on pretty much any computer. He’s put together a LiveCD/LiveUSB image which is available for download. 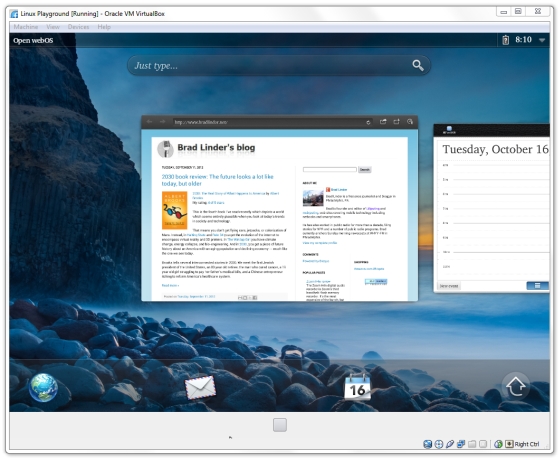 Once you’ve downloaded the 112MB file, you have a few options. You can burn the ISO to a CD and boot your computer from that CD to load open webOS.

Or you can use a tool like Unetbootin to create a bootable USB flash drive and try the same thing.

What I did was fire up the free virtualization software VirtualBox so I could load Open webOS in a window without rebooting my computer.

The Live image is based on an Open webOS build for Ubuntu Linux, and it loads much like any other Linux-based operating system. As you may have guessed from the 122MB file size, it’s a pretty light-weight operating system and it loads pretty quickly in VirtualBox. It also feels relatively responsive.

You get a few apps with this build including a web browser, calendar app, memo app, and email app. There’s no access to the HP App Catalog, so downloading and installing third party webOS apps will take a little elbow grease at this point.

But honestly, if you’re not a developer, the only reason to try open webOS right now is to poke around and see what it looks like. It will take a little while before the newly open sourced software is fast and stable enough to really use as a replacement for Android or another OS on your phone, tablet, or other device.

Ping-Husn Chen’s Live distro of open webOS is also a work in progress, so you might want to keep an eye on his site for updates.

via webOS Nation and Geek.com