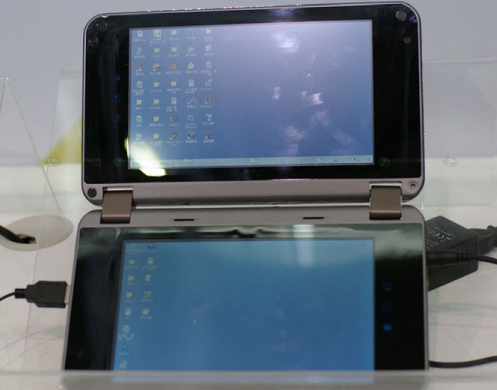 Chinese computer maker Taiji Electronics is showing off two new tablet-style computers. The first is called the Taiji T10A and it’s a 10 inch touchscreen model running Windows 7, a 32GB SSD, and a front-facing camera. The only thing really setting this model apart from the competition is that it’s powered by a 1.2GHz VIA C7-M processor and VX700 graphics processor.

The second model is much more interesting, thanks to its dual 8 inch touchscreen display, which let you use the device like a tablet or like a notebook… with a touchscreen where you’d normally find a physical keyboard.

The dual screen model looks a bit lie the Toshiba Libretto W100, but while Toshiba’s dual-display device has an Intel CULV processor, Taiji’s model uses a VIA chip.

VIA is known for making low power chips, rather than high performance processors, so I wouldn’t expect either of these tablets to be speed demons. But I also wouldn’t expect them to be as expensive as similar devices with Intel chips.

via Akihabara News and SlashGear