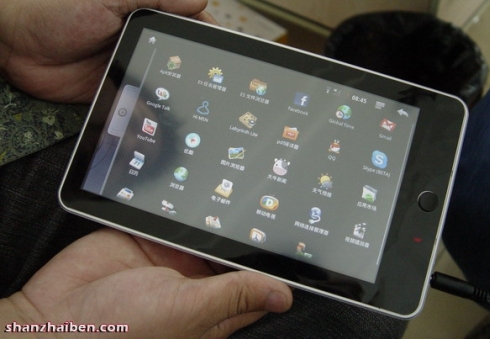 Another day, another crop of stories about tablet PCs. What’s a bit unusual is that all of today’s stories are coming out of China, where the folks at Shanzai.com spotted a bunch of 10 inch and smaller tablets running Google Android. None are quite ready to take on the Apple iPad yet, but that’s largely because:

That said, they’re still kind of fun to look at.

This tablet from Shenzhen Utopia Tech features a 7 inch, 800 x 480 pixel display and reportedly weighs just 0.7 pounds. It’s not clear which version of Google Android it runs, but it’s pretty clear from the picture above that it does run Android.

The tablet can handle 720p HD video playback, but 1080p content is out of reach.

This tablet has an 8 inch display and an ARM-based processor from Wondermedia, a subsidiary of VIA Technologies. The tablet has an unusually large bezel around the display which makes me wonder why the screen isn’t a bit bigger.

The Eken tablet is running Google Android 1.6. Shanzai.com spotted the tablet at the Global Sources China Fair in Hong Kong.

Given my inability to get anyone at Haleron to respond to an email, and given that I’ve never heard a single report of anybody successfully purchasing a Haleron product, I’m inclined to think that Haleron just grabbed the promo shots from Eken’s web site or somewhere else on the web and doesn’t actually have a product to sell. But it’s also possible that Eken is the Chinese ODM and Haleron and other companis could be regional resellers for this tablet.

The device has a 7 inch, 800 x 480 pixel display, a 600MHz ARM-based prossor, 128MB of RAM, and either 2Gb of flash storage. Unlike the Android tablets listed above, this model ships with Windows CE, although it’s likely capable of running Google Android.

The folks at SungWorld are showing off a series of tablets with 5 to 10.2 inch displays at the Global Sources China Fair. Most have 600MHz ARM-based processors and run Google Android 1.6.