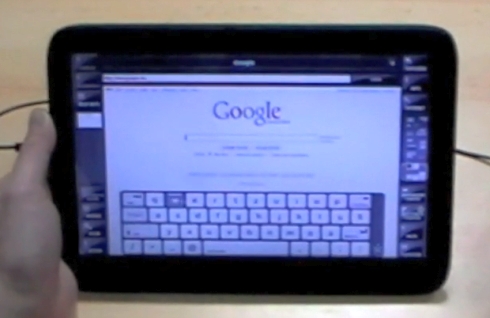 I swear, I’m not trying to turn the tablet news roundup into a daily feature here on Liliputing. But there’s just so much tablet news going around and I’d rather not write 3-4 separate posts to cover it all today, so here you go:

When the folks at Neofonie introduced the WePad tablet this week, it was pretty tough for any journalists or bloggers to get serious hands-on time with the tablet. That’s probably because there was only one prototype on hand and Nefonie didn’t want anyone breaking it or getting their grubby little fingerprints all over the screen. OK, it probably has more to do with the breaking thing.

Anyway, if you’ve been waiting to see how the tablet actually works, the wait is over(ish). Neofonie has put out a short video showing the tablet in action, complete with the custom Linux user interface designed for the WePad — and support for USB peripherals including a mouse.

The web browser seems quite responsive, as does tab switching. The on-screen keyboard looks reasonably useful, if not quite as finger-friendly as the iPad keyboard.

Will the WePad UI tempt anyone to shell out the cash for a WePad instead of an iPad? Probably not… unless Neofonie can attract third party developers en masse. But if you’re looking for USB peripherals, a webcam, or a high resolution display with a 16:9 aspect ratio — and you happen to live in Germany — then you might want to check out the video after the break.

PC maker Hanvon has renamed the Hanvon BC10C tablet as the Hanvon Touchpad. I have to say, the new name is a big more catchy. Along with the new name, Hanvon is officially launching the tablet — although it doesn’t appear to be on sale in the US yet.

This tablet appears to be in the early prototype stages. But a Korean company named Hard Kernel is working on a tablet running Google Android 2.1 with a 1GHz Samsung S5PC110 processor.

The ODROID has a 10.1 inch, 1366 x 768 capacitive touchscreen, and if the demo video below is anything to go by, it can comfortably surf the Engadget web site. That’s about all we know about it, because the demo video doesn’t show much of anything else — and to be honest, things get a bit jerky when trying to scroll through the web site. But it’s a work in progress. And it’s a tablet with Android 2.1 and a HD display, which is pretty nifty.

Live wallpapers and a 10 inch version of the Android keyboard look interesting — although the keyboard was clearly not built for ten-finger touch typing.