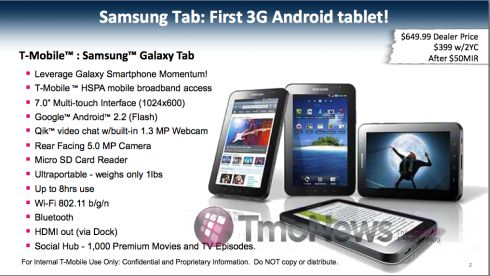 A lot of folks have complained that the Samsung Galaxy Tab 7 inch Android tablet seems to have an unreasonably high price tag — especially when compared to the Apple iPad which starts at just $499. We’ve seen European product listings with prices of $950 or higher. But that’s the unsubsidized price. Now a leaked document is providing a hint at the going rate in the US.

The folks at TmoNews got their hands on a document suggesting that T-Mobile will offer the tablet for $649 in the US. That’s the full price for an unsubsidized Galaxy Tab. If you’re willing to sign up for a 2 year mobile broadband service contract you should be able to get the tablet for $399 after rebate — or about $100 less than a WiFi-only iPad.

For your money you’ll get a 7 inch tablet with a 1024 x 600 pixel capacitive touchscreen display, Google Android 2.2, a 1GHz Samsung Hummingbird processor, HDMI output, front and rear cameras, Bluetooth, WiFI, and access to the Samsung Media Hub software which lets you purchase and download movies and TV shows.

Other major US wireless carriers including Sprint, AT&T, and Verizon are also expected to offer the Galaxy Tab, and while we haven’t seen final pricing from those companies yet, I suspect they’ll be competitive. Of course, a leaked document isn’t exactly the same as an official announcement, so I wouldn’t bet the farm on T-Mobile offering the Galaxy Tab for $399 with a contract.