T-Mobile has released an app that lets you unlock your GSM phone so it can be used on other networks. All you need to do is download the Device Unlock app from the Google Play Store and choose from the permanent unlock or temporary unlock option (which can come in handy for international travelers).

The closest thing there is to a catch right now is that only one phone is supported at launch. 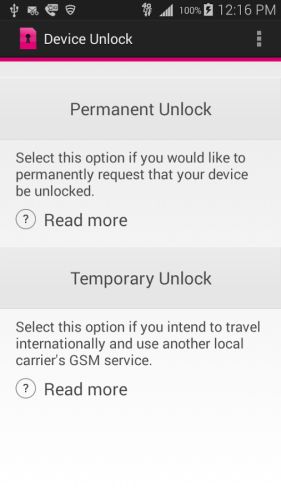 If you have a Samsung Galaxy Avant you can use the Device Unlock app. If you don’t… you can’t.

Eventually T-Mobile could add support for additional phones, which could make it easier to use T-Mobile phones on other GSM networks. There may be some restrictions: the device unlock tool reportedly fails and tells you that the device is ineligible under certain circumstances (such as if you still owe money on your contract).

If you choose the temporary unlock option, your phone will be carrier unlocked for 30 days so you can use the phone while traveling (or testing a competing network, I suppose).

Note that phones which work on T-Mobile’s network in the United States should be able to work on AT&T’s network… although not all phones will support both 3G and 4G data on both networks. Unlocking a T-Mobile phone will most likely not allow it to work on Verizon or Sprint’s networks. But if you’re traveling to Canada, Europe, or elsewhere, the temporary unlock option could make it a lot easier to take your phone with you.