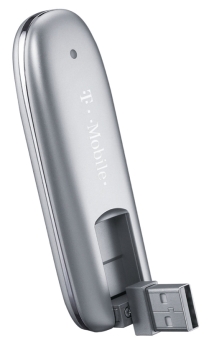 T-Mobile USA says it’s on track to offer its faster HSPA+ mobile broadband network in 100 major metro areas covering 185 million Americans by the end of the year. The company added 25 new cities to its coverage area this week, bringing the current number of major cities to 50 and the number of people in the service area to 85 million, which means there’s only… I guess a hundred million to go.

HSPA+ is still technically a 3G mobile broadband service, but it offers speeds which T-Mobile says are comparable to what you would expect from LTE or WiMAX 4G networks.

T-Mobile also launched a new HSPA+ modem called the webConnect Rocket 2 USB Laptop Stick. It has a rotating swivel design which allows it to fit in tighter spaces than a traditional USB modem. The company also plans to introduce its first HSPA+ capable smartphone later this year.