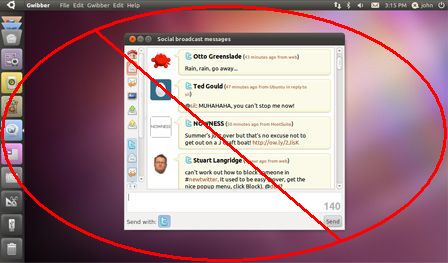 Canonical released the latest version of Ubuntu Linux this weekend, to much fanfare. But while Ubuntu 10.10 is the latest… not everyone is convinced it’s the greatest. Linux computer system builders System76 has decided it wont’t be offering netbooks with Ubuntu 10.10. Instead, the company’s Starling Netbook will continue to ship with Ubuntu 10.04.

The latest version of Ubuntu Netbook Edition features a new user interface called Unity. It’s designed to work well on computers with low resolution displays, such as the 1024 x 600 pixel screens that are typically found on netbooks. But in a note on the Ubuntu Forums, System76 president Carl Richell says the Unity interface is still too rough around the edges to offer to consumers.

He says it takes too long to launch applications, the user interface can be confusing, and searching for apps tends to bring up a list of unrelated apps.

So while other System76 computers may start shipping with Ubuntu 10.10, the company plans to continue offering Ubuntu 10.04 on the Starling Netbook at least until Ubuntu 11.04 is ready to go.

Have you tried out Ubuntu 10.10 Netbook Edition and its new Unity interface? What do you think of it? Let us know in the comments.