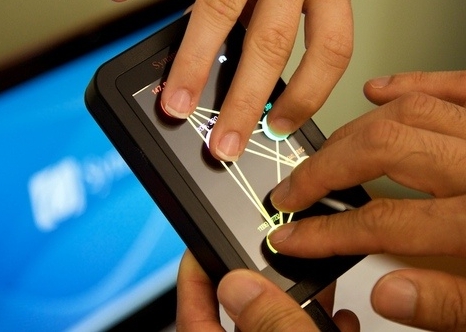 You know how the OLPC folks promised us a dual-screen netbook that would have a virtual keyboard that could pop up on one screen? It looks like we could be one step closer to getting that virtual keyboard. Synaptics, a company best known for making the touchpads used in millions of notebooks, is working on a new touchscreen technology called ClearPad 3000 that will support up to 10 inputs.

In other words, forget about 2-finger gestures like pinching, zooming, and rotating. You’ll be able to type away to your heart’s content on a virtual keyboard — albeit one without real tactile feedback. The touchscreen will also support a number of gestures, but that’ll be up to the software makers. Synaptics says the screens could be up to 8 inches. Larger screens are theoretically possible, but a 15 inch touchscreen capable of recognizing 10 fingers at once will probably kill your laptop’s battery in a matter of minutes.

In other words, we’ll probably see the ClearPad 3000 show up first in smaller touchscreen devices like cellphones and small netbooks. Now if only someone could figure out how to fit 10 fingers on an iPhone screen.

You can check out a video demo from Gizmodo after the break.