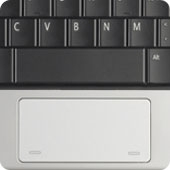 Remember two years ago when 2-finger touchpad scrolling was all the rage? You ain’t seen nothing yet, because touchpad makers Synaptics have introduced support for four-finger gestures.

Synaptics is also starting to demonstrate a new system called ClickEQ which is a ClickPad which is basically a touchpad with integrated buttons, eliminating the need for physical left and right buttons. It’s designed for use on smaller form factor notebooks.

I’m not entirely sold on buttonless touchpads, but the folks at Engadget say the ClickEQ feels like the glass trackpad used on Apple’s latest MacBooks, which doesn’t sound that bad.

There’s no word on how long it will be before we start to see TouchPad-IS or ClickEQ show up in actual notebooks and netbooks.

One reply on “Synaptics adds 4-finger support to PC touchpads”