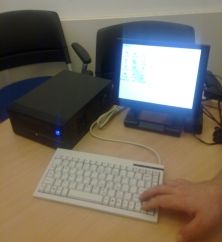 Google Android isn’t the only mobile phone operating system capable of running on netbooks anymore. The folks behind the Symbian operating system (which incidentally, started out as the EPOC operating system that powered early Psion handheld computers a decade ago), recently ported Symbian to work with the Intel Atom processor.

The port is pretty rough at this point. The screen resolution hasn’t been changed, nor has the graphical user interface. But the operating system can run on a computer with a low powered Intel Atom CPU… and that means Symbian could become a netbook, MID, or UMPC operating system in the future.

I haven’t used Symbian since back when it was still called EPOC, so I’m not that familiar with the OS in its current state. What do you think, does it hold potential as a mobile internet device operating system?