Swype is a keyboard for Android devices that lets you enter text either by tapping one letter at a time, or by dragging your finger from key to key without lifting it from the screen. Most of the time using that swiping gesture action will be faster than traditional typing, thanks to Swype’s strong text prediction software which does a pretty good job of figuring out what word you meant to enter.

Up until now there have been two ways to use Swype. You could buy a phone that came preloaded with the software, or you could download a beta version from the Swype forums.

Now you can install Swype on most Android phones and tablets by downloading it from the Google Play Store. The keyboard app is available for a limited time for just $0.99. 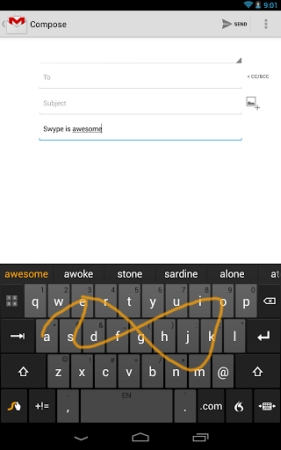 There’s also a 30-day free trial version if you want to take Swype for a test drive before plunking down any money.

Swype is owned by software company Nuance, and previously the company’s business model had involved partnering with phone makers and wireless operators to preload the keyboard on handsets. Hundreds of millions of devices ship with Swype pre-installed.

The release of a Play Store app should make it easier for anyone who hasn’t already purchased a phone with Swype to use the software. But the company’s entry into this space may seem a bit late to some.

While Swype was the first popular gesture-driven keyboard of its type, there are now a number of keyboard apps that offer similar features. SwiftKey, TouchPal, and SlideIT all offer gesture-based typing. And the default Android 4.2 keyboard even includes similar functionality.

The official Swype app is available for Android 2.2 Froyo and later.

3 replies on “Swype finally hits the Play Store, install the gesture-driven keyboard for $0.99”