For the past two weeks I’ve been getting to know Windows 10 S while testing the Asus NovaGo convertible laptop. It’s one of the first Windows 10 computers to ship with an ARM processor, and it also ships with a version of Windows 10 that stops you from installing third-party apps unless they com from the Microsoft Store.

While I’ve been underwhelmed by the NovaGo’s performanc, I’ve been pleasantly surprised by Windows 10 S: it looks and feels just like Windows even if it can’t run every app you’re used to. And while a lot of the Windows apps I use most frequently aren’t available from the Microsoft Store, but there are plenty of alternative apps that are. Or you can turn to web apps like Google Docs or Office Online.

If you do need to run programs that aren’t on the web in the Microsoft Store, it’s also really, really easy to switch to Windows 10 Pro (or Windows 10 Home if you have a computer that ships with Windows 10 Home in S Mode). 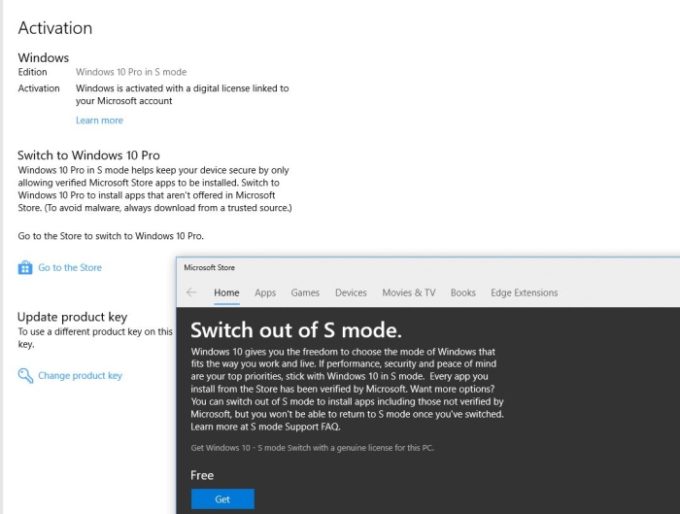 How easy? It takes about a minute and you don’t even need to reboot the computer.

One thing to keep in mind before you make the switch though, is that it’s a one-way move. As of July, 2018, you can switch from S Mode to Windows 10 Pro, but you can’t ever switch back.

Still interested? OK, here are the steps for switching out of S mode:

That’s it.  After a few seconds you should be able to go back to the Activation tab and see that you’re running Windows 10 Pro instead of Windows 10 S.

Note that there are a few shortcuts that can make the process a little faster. You can combine steps 1-3 above by just typing “Activation” into the Windows Start Menu search bar and clicking the Activation option when it pops up, for example. Or you could jump straight to step 4 by just opening the Microsoft Store and searching for “Switch out of S mode,” although you may also encounter unrelated apps by doing that.

I’m just starting to play around with Windows 10 Pro on the Asus NovaGo. Because the computer has a Qualcomm Snapdragon 835 processor rather than an Intel or AMD chip based on x86 architecture, there are still some limitations. It won’t run 64-bit x86 apps, for instance, and some 32-bit x86 applications may run more slowly than you’d expects, because the computer has to emulate an x86 instruction set on ARM hardware in order to run them. Some drivers for peripheral devices may also not work.

That said, it’s nice to at least have the option of downloading and installing apps from anywhere on the internet and not just the Microsoft Store… even if they might not run as well as they could (or at all). Now I can use Chrome, GIMP, LibreOffice, QuickBooks, and a number of other apps that aren’t available in the Microsoft Store.

Note that these limitations are specific to Windows computers with ARM chips. If you buy a Windows 10 S device with an Intel or AMD processor, switching out of S mode should allow you to run 64-bit x86 applications and just about any other software.

7 replies on “Switching from Windows 10 S to Windows 10 Pro takes less than a minute, no reboot required”