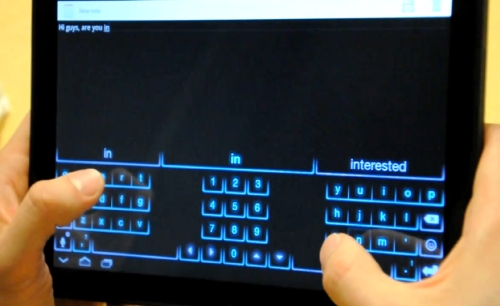 SwiftKey is one of the more popular third party keyboard apps for Google Android devices. But what works on a smartphone with a 4 inch or smaller screen doesn’t necessarily work on a7 to 10 inch tablet. So the folks behind SwiftKey have been working on a tablet version of their software. Today they unveiled it.

The new SwiftKey Tablet keyboard takes its cues from Google Android 3.0 Honeycomb’s user interface, and uses a similar “holographic” theme. Basically that means it features a lot of blue and black, with some new animations.

Like the smartphone version, SwiftKey Tablet uses the company’s text prediction engine to help reduce keystrokes. But key difference is a split-screen design that allows you to type with your thumbs without contorting your hands to reach the middle of the screen (most of the time). That’s because the QWERT keys are on the left side of the display while the YUIOP keys are on the right. The number keys, which you probably use less frequently hang out in the middle.

As you type, suggestions pop up in the space above the keyboard and you can tap those words to finish entering text.

The overall design is pretty clever and should make text entry pretty easy when you’re holding an Android tablet in your hands. It seems like it would be clunky for iPad-like touch typing though.