There was a lot of refreshed hardware at Microsoft’s Surface event today, but there was also one totally new device. The Surface Laptop Studio was unveiled, and it’s here to target the same performance-hungry types who Microsoft targeted with the Surface Book.

It’s not a detachable device like the Surface Pro or Surface Book. Instead, the touchscreen on the Surface Laptop Studio mates with a hinged back cover to slide forward over the keyboard and trackpad. The Studio also lets you fold the display all the way down so that you can sketch on it like a tablet. It’s not the first convertible laptop with an easel-style design, but it is a new form factor for Microsoft’s Surface lineup. 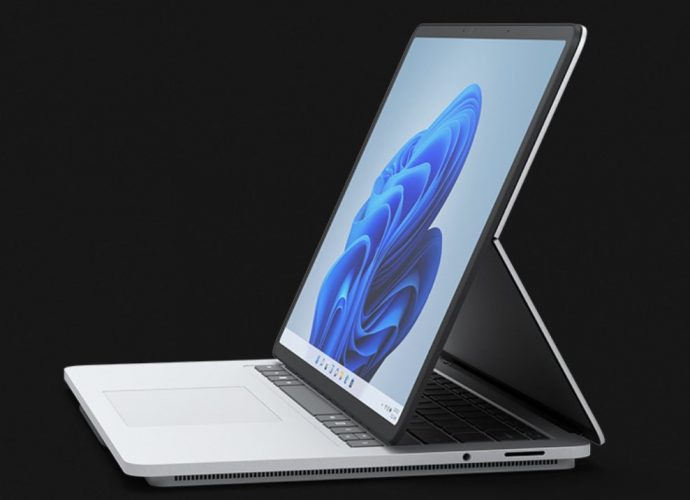 The Surface Laptop Studio’s 3:2 PixelSense Flow display measures 14.4 inches diagonally and has a native resolution of  2400 x 1600 pixels. Like the PixelSense display on the Surface Pro 8, this one refreshes at 120Hz. Packed into it slim bezels are a Hello-ready front-facing camera and dual far-field Studio microphones for video calling.

Core i5-powered Surface Laptop Studio models utilizes Intel’s Iris Xe GPU, while the higher-end i7 models are equipped with an NVIDIA GeForce RTX 3050 Ti  with 4GB of GDDR6 memory. Storage options run from 256GB all the way up to 2TB, and they’re removable just like the drives on the Surface Pro 8. Lower-end models ship with 16GB or LPDDR4x RAM, higher-end with 32GB.

Also like the Surface Pro 8, the Surface Laptop Studio offers a pair of Lightning 4 USB-C ports so you can connect to all kinds of high-performance external devices. There’s also a Surface Connect port and 3.5mm jack for connecting your trusty old Surface dock and favorite headphones (assuming those aren’t Bluetooth by this point).

The Surface Laptop Studio is Microsoft’s endurance champion, with Core i5-based models boasting 19 hours of runtime. Core i7 models clock just an hour less. They’re slightly heavier, too, at 4 pounds compared to the i5 at 3.83 pounds.

Microsoft packed a few other interesting surprises into the Surface Laptop Studio. The keyboard is not only backlit like it was on the Surface Book, but Microsoft’s tech specs note that it features mechanical keys. The generously-sized trackpad has been enhanced with haptics, similar to Apple’s Force Touch.