Rooting an Android phone lets you customize the behavior of your device, access protected files and folders, and generally muck around with the operating system. But it also makes your phone more vulnerable to malware, because if you can alter system files, then so can third-party software. So it’s not surprising that some Android apps won’t work on a rooted device, including many banking apps, Android Pay, and a number of streaming video apps (which probably has to do more with fending off piracy than protecting your personal data).

But if you want to get around those restrictions, there are a few apps that can hide the root status of your device from Google’s SafetyNet… for now. One is Magisk, a tool that also provides a bunch of other features. And now here’s another option for folks looking for a simpler solution. It’s called suhide lite, and it’s developed by Chainfire, the developer of the SuperSU utility for rooted devices. 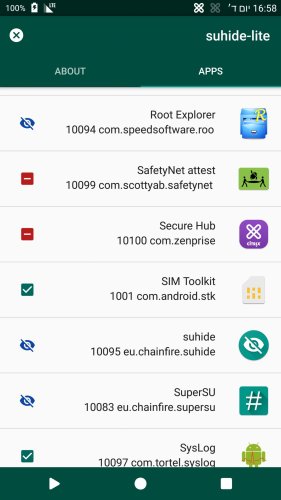 If you’re already using Magisk, there’s probably not much reason to switch. But if you’ve rooted an Android 6.0 or later device with SuperSU 2.82 SR2 or later, Chainfire says suhide lite should do the trick.

This is actually an update to an older app called suhide, which no longer works. And Chainfire notes that at some point,, suhide lite could stop working as well — because right now developers are playing a game of cat and mouse with Google. Developers find a way to trick Google’s SafetyNet so that it doesn’t notice that a device is rooted, and Google updates SafetyNet so that it does notice. Rinse and repeat.

Eventually though, it’s possible that Google could change the way SafetyNet works to make it significantly more difficult for developers to hide root status.

While Chainfire’s pessimistic of the future of utilities that hide root, and also describes hiding root as a “bad idea,” he knows that it’s something people want to be able to do, so he released an updated version of the tool, giving users an alternative to Magisk.

You know, until they both stop working.

Note that in addition to a rooted device with SuperSU, you’ll need TWRP 3.0.2 recovery installed on your device in order to flash suhide lite.

via Android Police and +Chainfire