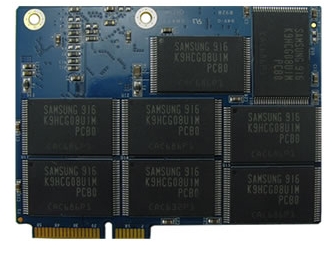 The company launched a half mini PCIe solid state disk and a double wide half mini PCIe. The half mini model will be available either as an MLC disk with 16GB to 32Gb of storage space, or an SLC disk with 8GB to 16GB. The double wide version will come in 64GB to 128GB (MLC) or 32GB to 64GB (SLC) varieties. The MLC versions will have read speeds up to 80MB/s and write speeds up to 40MB/s, while the SLC disks feature the same read speeds and faster 60MB/s price speeds.

No word on pricing yet, but the MLC disks will feature a 2 year warranty and the SLC versions will include a 3 year warranty. More information should be available at Computex next week.