Last year the folks at My Arcade introduced a handheld game console at CES called Retro Champ that let you play classic 8-bit NES games… by plugging in NES carts.

This year, the company is following up with the Super Retro Champ. As the name indicates, the new model lets you play 16-bit Super Nintendo carts… but it also supports Sega Genesis carts.

The new model is set to go on sale later this year for $110. 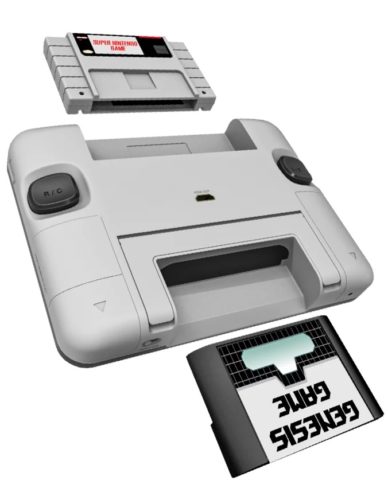 The Super Retro Champ features a 7 inch display with a D-Pad on the left, Start, Select, and Action Buttons, and shoulder buttons on the back of the console.

While it’s designed so that you can hold the system in your hands, it’s a bit larger by modern handheld standards… but there’s also a kickstand on the back that lets you prop the system up and stand it on a table. There’s also an HDMI port if you want to connect the Retro Champ to a TV and play with a wireless gamepad (there’s support for two-player gaming when you do that).

The built-in battery should provide up to five hours of battery life.

Unlike most retro consoles, the Super Retro Champ does not come with any games pre-installed, and it doesn’t have any built-in storage or SD card reader, so you can’t load ROMs. But if you’ve either got a stash of old-school NES or Genesis carts lying around, or know where to get your hands on some, the Super Champ could be a fun way to take a trip down memory lane without powering up a 30-year-old game console.

via Gizmodo and GamaSutra