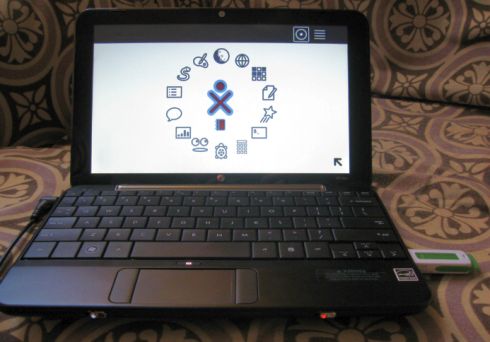 The OLPC XO Laptop may have sparked the netbook revolution by showing it’s possible to create and mass produce a low cost but quie capable computer. The project provided the spark that led to the creation of the Asus Eee PC, HP Mini Note, and scores of other low cost ultraportable computers. But there are a few things the OLPC team did that have yet to be imitated, including the group’s advancement in cheap display technology and the innovative Sugar OS which packs a whole bunch of educational tools into an open source desktop environment.

But a few of the founding members of the OLPC project have moved on to new enterprises, where they’re hoping to bring their innovative ideas to the masses. Mary Lou Jepsen’s Pixel Qi is expected to begin producing low cost, ultra low power, high quality displays this year. And Sugar OS creator Walter Bender has moved on to Sugar Labs, a group which hopes to bring the Sugar interface to additional devices.

The goal is to bring the Sugar OS to any computer, not just the OLPC XO Laptop. And as step one, the team released Sugar on a Stick a while back. Basically, what Sugar on a Stick lets you do is download and install the Sugar OS onto a USB flash disk with 1GB of storage space or more. The end result is a USB stick that you can insert into pretty much any x86 based computer to boot into the Sugar environment.

There are two versions of Sugar on a Stick available at the moment. One is based on Fedora 10, while the other is basedo n Ubuntu 8.10. I tried out the Fedora version, which also makes it easy to create persistant storage space on the flash drive, which means you can save any changes to the USB stick. In other words, while Sugar on a Stick boots like a LiveUSB, since you can save changes you can treat it like a portable operating system. You can carry it with you and plug it into any computer to pull up your operating environment.

Sugar OS is designed primarily as an educational tool for children, and includes a number of games, and other tools including utilities kids can use to write their own programs. But if you want to see what the buzz is about without buying your own XO Laptop, Sugar on a Stick is the way to go.

4 replies on “Sugar on a Stick: Run the OLPC operating system on any PC”