Palm stopped making the OS years ago, instead moving to webOS — which was acquired, practically killed, and then turned into an open source project by HP.

But if you’ve still got some classic Palm apps that you paid good money for and would still like to run, there’s hope. Now you can run Palm OS apps on an Android phone or tablet. 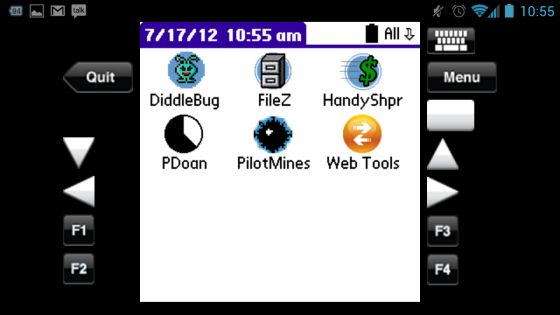 StyleTap has been offering tools that let you emulate Palm OS and run classic games and other apps on Windows Mobile, Symbian, and iOS for years. Now StyleTap is also available for Android 2.0 and up.

StyleTap for Android supports apps written for Palm OS 5.2 and earlier, which covers about 30,000 apps.

When you fire up the app you’re greeted by a Palm interface with a list of installed apps, as well as a few buttons below the screen to emulate Palm Pilot-style hardware keys.

Installing apps is a bit of a pain — you either have to load them using a PC app or configure the “web tools” option to load them.

There’s a 14-day free trial, but a full license will set you back $49.95. That’s a lot of money by Android app standards, but StyleTap isn’t just aimed at nostalgic Palm OS gamers that want to relive their glory days.

It’s also designed for corporations and other institutions that have invested heavily in specialized mobile apps for Palm OS. Now they can upgrade from ancient Palm devices to newer Android phones or tablets while retaining the ability to run important software.

Among other tings, StyleTap for Android lets you access your Android keyboard, access your phone’s GPS, or run Palm OS apps that record or play audio. You can use your phone’s storage as a virtual memory card. And you can cut, copy, or paste text between a Native Android app and a Palm app.