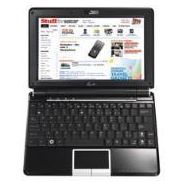 UK men’s magazine Stuff has put out its list of the top gadgets of the year. And at the top of the list is the Eee PC 901. The tiny laptop beat out the iPhone 3G, Xbox 360, and PS3 to win.

The reasoning is a bit odd, if you ask me. Stuff says the Eee PC helped spark the netbook revolution, which is absolutely true. But it was the original Eee PC 4G 701 that did that. The 901 is certainly one of the more attractive current generation netbooks. But it’s also one of the more expensive. And the market’s flooded with laptops that have similar specs: an 8.9 inch display and 1.6GHz Intel Atom CPU with a weight under 3 pounds.

Still, if Stuff felt it would be silly to give an award to the cheaper 701 now that it looks so outdated less than a year after release, I suppose the next best thing is to bestow the honor on its successor. Personally, I prefer the Eee PC 1000 series, which has a larger, easier to use keyboard.

The iPhone 3G did win the magazine’s reader’s choice award.